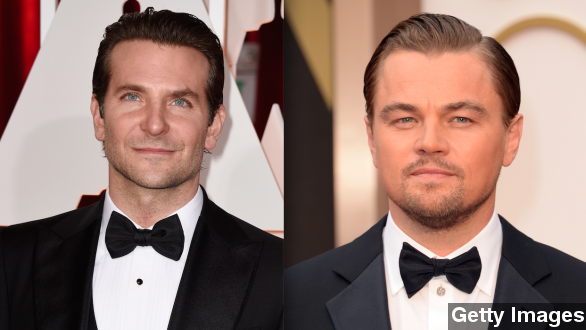 SMS
Is Bradley Cooper Turning Into Leonardo DiCaprio?
By Lauren Zima
By Lauren Zima
March 5, 2015
It's a question that's been bugging us since the Oscars, and we had to investigate.
SHOW TRANSCRIPT

It's a question that's been bugging us since the Oscars, and we had to investigate.

We loved him in "Wedding Crashers," we adored him in "The Hangover." No, wait. Just the first one.

But lately, Bradley Cooper has been diving deep into more serious roles — for the most part.

So, take the Oscars. DiCaprio has lost in the best actor category three times. At this year's Oscars, Bradley Cooper lost in his third best actor nomination. So why do these guys, who are both great actors, lose?

DiCaprio perhaps made the mistake of getting stuck in a pattern, repeatedly working with the same director: Martin Scorsese.

Then there's Cooper. He is currently working on his third movie with director David O'Russell.

Leo did take a break. He tried a biopic directed by Clint Eastwood. Didn't work. Lost the Oscar.

And that same tactic didn't work for Cooper either.

Alright, let's compare their personal lives. Forty-year-old Leonardo DiCaprio used to date people in his age range, like Gisele Bundchen. Then he started dating 20-something models, like Bar Refaeli, Erin Heatherton and Toni Garrn. She is 22.

And 40-year-old Bradley Cooper used to date people in his age range, like Renee Zellweger and Zoe Saldana. Now, he's dating model Suki Waterhouse. She is 23.

And the culmination of personal and professional — this means everything — who does DiCaprio bring as his date to big events like the Oscars? Is it the 20-something model girlfriend? (Video via Warner Bros. / "The Ellen DeGeneres Show")

Nope. His mom. He always brings his mom.

At this year's Academy Awards, there they were, front row, Bradley Cooper and his mama bear.

There’s only one conclusion to draw here, folks. Bradley Cooper is the next Leonardo DiCaprio — if not there already. In fact, we'd maybe wonder if they were the same person.

If this hadn't happened in 2014. The two made headlines for both bringing their moms to the Golden Globes.

Same place at the same time means they can't be the same person, right?

And here, this'll just really blow your mind. Sometimes Bradley even hangs out with Leo's mom. Probably to get tips on how to be like Leo.

This video includes images from Getty Images and music from BOPD / CC BY 3.0 and Deal The Villain / CC BY NC ND 3.0.