Is 'Better Call Saul' Stuck In The Shadow Of 'Breaking Bad'? 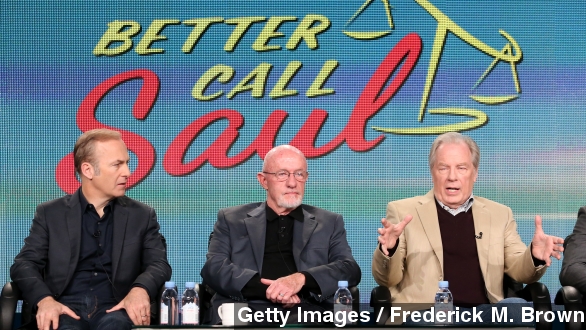 When AMC premieres "Better Call Saul" Sunday, the network can expect a big ratings boost from the new show's connection to one of the most acclaimed TV shows ever.

However, carrying the "Breaking Bad" moniker might end up bogging it down in the long run.

Bob Odenkirk returns to play his "Breaking Bad" character, slimeball attorney Saul, who is going by Jimmy McGill at this point in his story.

"I'm No. 1 on your speed dial, right next to your weed dealer. Please call me McGill, James McGill," said Odenkirk as McGill in the "Better Call Saul" trailer.

Teasers have been keen on channeling the show's predecessor. We see bleak deserts, duffle bags full of cash and a scowling Jonathan Banks — images that became the hallmarks of "Breaking Bad."

But there are two worries here: first, that "Better Call Saul" won't live up to "Breaking Bad," and second, that it'll ruin it. Let's recall the "Friends" spinoff, "Joey," which didn't exactly do great things for that franchise.

Early reviews of "Saul"'s first few episodes are overwhelmingly positive, and it seems showrunner Vince Gilligan got the band back together for something more than just a cheap sequel.

But reviewers are also painfully aware of the "Breaking Bad" comparisons.

"Better Call Saul"'s co-creator Peter Gould tells The Hollywood Reporter: "It's tough. We have this glorious thing — a built-in audience that knows this character and that's interested in the world of the show — but the truth is, this isn't 'Breaking Bad.'"

That's why execs were quick to let audiences know they wouldn't be seeing Bryan Cranston or Aaron Paul reprise their roles in season one of "Better Call Saul."

"Breaking Bad"'s final seasons set a breakneck pace as Walter and Jesse dealt with drug cartels and hitmen. But it doesn't seem like we can expect to see Jimmy battling out with Mexican drug lords, at least not for a while.

However, if audiences can put "Breaking Bad" aside, they will likely find some enjoyment in Jimmy's smaller and darkly comic tale.

Wired writes, "Although the desperate chronicles of a seedy attorney might not have quite the same high concept punch as a terminally-ill, meth-cooking high school chemistry teacher, there's a similar sort of desperate ambition that runs through the heart of both shows, and one that is hard to look away from."