Is 'Assad Must Go' Still U.S. Strategy In Syria? 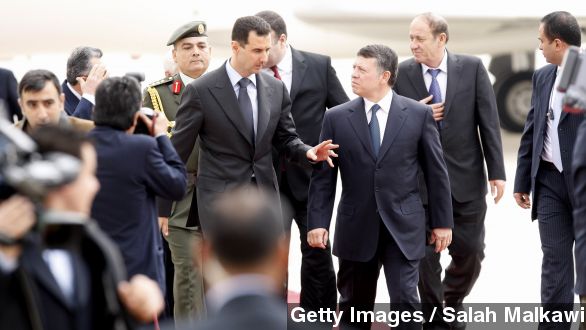 "A year ago, Qaddafi was one of the world's longest-serving dictators — a murderer with American blood on his hands. Today, he is gone. In Syria, I have no doubt that the Assad regime will soon discover that the forces of change cannot be reversed and that human dignity cannot be denied," President Obama said during his 2012 State of the Union address.

Chances are we won't hear the same prediction in Tuesday night's State of the Union.

That's because, despite the administration's position that Bashar al-Assad must go, Syria's dictator appears to be staying put — at least for the foreseeable future. (Video via Sama TV)

Syria's civil war, which has killed at least 200,000 people in less than four years, has pit the Assad regime against various rebel groups seeking his overthrow.  (Video via Islamic Front)

Assad's forces have been accused of mass murder, torture and chemical attacks against citizens.

A lot has changed in the past year. The U.S. has gone from threatening airstrikes against Assad ...

"Even a limited strike will send a message to Assad that no other nation can deliver," President Obama said.

... to working with him. The U.S. agreed to remove the threat of military action in exchange for Assad handing over his chemical weapons.

It's not like he needed them. His forces have continued making gains while the U.S. focus has shifted to taking out his biggest enemy, ISIS. (Video via U.S. Central Command)

The dilemma for the White House is, helping to push out Assad without a good alternative might only make things worse. There's no telling who among Syria's extremists would gain power. (Video via Syria TV)

Which might be why we're seeing a shift in U.S. policy. Last week, Secretary of State John Kerry voiced support for two new proposals — neither of which called for Assad's removal. (Video via U.S. Department of State)

The first, from the United Nations, would suspend fighting on the ground and allow in aid deliveries, beginning first in the city of Aleppo. (Video via Hazzm Movement)

The other proposal comes from Assad's ally, Russia. It calls for talks between the government and the opposition to be held in Moscow later this month. (Video via Kremlin)

In all likelihood, those talks will meet the same fate as last year's failed peace negotiations in Geneva. Already several key opposition groups have said they won't be attending.