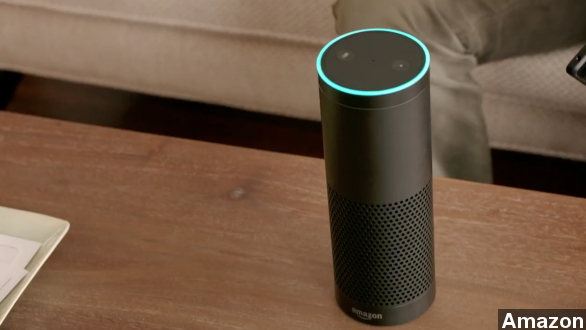 SMS
Is Amazon's Echo Here To Make Shopping Easier?
By Christian Bryant
By Christian Bryant
November 6, 2014
In a surprise announcement, Amazon introduced Echo — a Siri-like device/at-home speaker. But some think the device could also be used for shopping.
SHOW TRANSCRIPT

By Thursday, there was this:

"I can play music, answer questions, get the news and weather, create to-do lists and much more."

That was Echo. Amazon made clear Thursday it wants to put an artificially intelligent device in your home.

Before we discuss, let's go through a few knee-jerk reactions.

There's an expected comparison from CNET: Echo is a "Siri-like digital assistant."

A Gizmodo writer said it's the "most important product in years."

Finally, this gem from Mashable: Echo "tells you what you want to hear."

There's a Theodore Twombly out there somewhere grinning from ear to ear. (Video via Warner Bros. / "Her")

Amazon calls the Bluetooth-enabled Echo a device "designed around your voice." It has seven microphones to identify voices in a room, even when music is playing. It updates via the cloud and, according to the company, "The more you use Echo, the more it adapts to your speech patterns, vocabulary, and personal preferences."

Initially, it's hard to see how this device really differs from Siri or Cortana or that voice Google uses. But a writer at Gizmodo says Echo stands out because of where it'll be used.

"The genius of Echo is that it's a more nimble, leaner version of a technology that's been caged up inside of other devices for years. ... Amazon snuck a device that puts essentially the same software front and center for no other purpose than to chat with you." It's basically a piece of smart furniture.

But Echo could have yet another feature, or future feature, that reveals an entirely different purpose for the device.

Amazon has been working to make grocery shopping easier through Prime Fresh grocery delivery, and a writer for Wired says, "By allowing users to make shopping lists by voice alone, Amazon is moving closer to a time when 'one-click' shopping becomes 'no-click' shopping."

TechCrunch is a bit more blunt about that same prediction: "Amazon is in the business of selling you things — and that is why Echo exists."

That functionality won't be available when Echo launches — as far as we know. But how it's used is still up to the consumer.

A writer at The Verge comments on other all-in-one devices, saying, "Millions of people use the iPhone mostly as a phone, thousands of others use Apple TV as a Netflix box. The Echo is a speaker and it will be used by me and plenty others as just that."

According to The Verge, Echo is priced at $199 but will be available to select Prime members for $99. It will begin shipping in the coming weeks.