Is Adding Tech A Smart Move For Traditional Watchmakers? 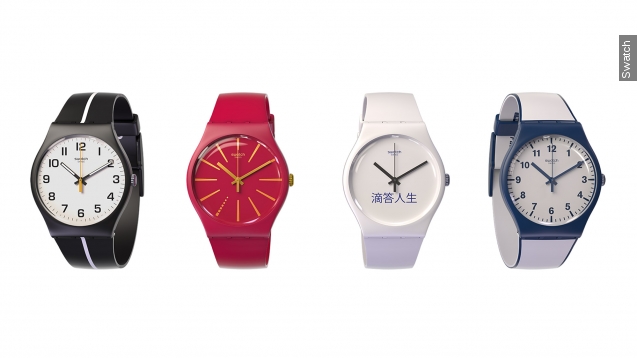 How does that old saying go? If you can't beat 'em, join 'em? It seems Swatch — the considerable leader in global watch sales — is heeding that advice. (Video via Swatch)

"I have my Swatch here on my wrist. I'm just here, and then I have to pay. I don't have to pull out the credit card," said Swatch CEO Nick Hayek in an interview with The Wall Street Journal.

The watchmaker has announced a partnership with payment company Visa to bring tap-to-pay functionality to the Swatch Bellamy, Swatch's new NFC-enabled wristwatch. (Video via The Wall Street Journal)

NFC stands for near-field-communication. Typical NFC implementation involves a tiny chip inside a smartphone — or in this case a watch, and a tiny chip inside another device — be it a phone, tablet, computer, etc. When the two chips are close enough together — usually less than 3 or 4 inches — they are able to communicate with one another.

So why NFC and why now? Well, here's what we're thinking: NFC functionality is an all-but-standard feature for smartwatches. Samsung's Gear S2 has it, the Apple Watch has it and the same goes for LG's second take on the Watch Urbane. (Videos via Samsung, Apple)

And we can't forget the recent Bloomberg report that revealed a steep decline in Swiss watch exports. Exports fell 12 percent — the biggest drop in six years, according to the outlet — and some cited smartwatches as a notable reason for the drop. (Video via Swatch)

TAG Heuer now sells a watch with a built-in gryroscope, microphone, vibration engine and more. Frederique Constant offers a watch that tracks your sleep and movement. And although not quite as prestigious as TAG, Frederique and the like, it's worth mentioning Fossil also offers a smartwatch-style timepiece.

So how do you maintain your grip on the watch market? We'll say it again: If you can't beat 'em, join 'em.