Is A Third Intifada Inevitable In Israel? 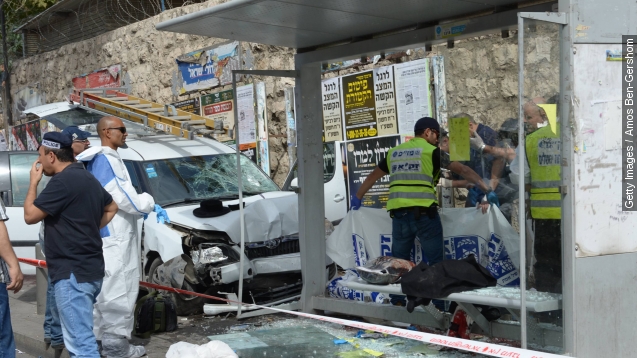 The news coverage of the growing violence in Israel is beginning to have a similar theme.

"Are we headed toward a third intifada here?"

"What would make this turn into a new intifada?"

"Right now you have — essentially what people fear is perhaps another intifada."

It's an easy comparison to make; the previous intifadas saw clashes between Israelis and Palestinians. But there's one huge difference: a lack of organization.(Video via MSNBC)

"It can't be compared to the first two intifadas because this isn't an organized uprising."

The recent violence has been largely random and not really linked to any group.  Also the attacks mostly involve young people stabbing or shooting instead of the orchestrated fighting of the past. (Video via CNN,Channel 2)

Similar comparisons to an intifada were made last year, when violent flare-ups rocked the region following Israel's bombing of Gaza. Yet the years-long fighting of the first and second intifada failed to materilize.

But some think that could make the current leaderless violence even more terrifying. A writer for Haaretz wrote: "Recent attackers didn't leave behind video wills explaining their motives. None were affiliated with any terrorist organization or political group."

The attacks have inspired similar lone wolf retaliation from Israeli vigilantes, escalating the violence even further. (Video via Sky News)

"They’re, in a sense, outlaws who believe in taking the law into their own hands, and that can exacerbate the whole thing," former Ambassador to Israel Martin Indyk said on a radio show recently.