Is A NASA Lab About To Crack Interstellar Travel? 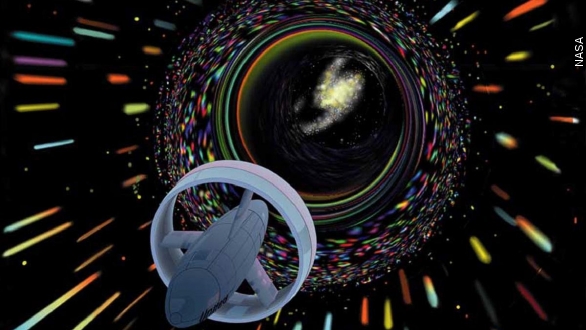 SMS
Is A NASA Lab About To Crack Interstellar Travel?
By Steven Sparkman
By Steven Sparkman
May 1, 2015
A post on a popular spaceflight website suggests NASA scientists have found evidence for two propulsion theories at the fringe of scientific thought.
SHOW TRANSCRIPT

NASA has a well-deserved reputation for making the unthinkable a reality. So what are we to make of it when a handful of NASA scientists quietly leak the news that they've defied the laws of physics?

A recent post on NASASpaceFlight.com summarized a discussion that's been happening among physicists on the site's forums. The site isn't affiliated with NASA, but NASA scientists have been participating.

The news from the forums is that a team of those NASA scientists, working at the Eagleworks lab at NASA's Johnson Space Center, has found new evidence for two incredible ways of traveling through space. Either one of them could let humans explore the rest of the galaxy, and both are at the absolute fringe of scientific thought.

Let's tackle the first one. Last year we learned the Eagleworks team, headed by Dr. Harold "Sonny" White, tested engines called the EmDrive and the Cannae drive and were able to measure thrust coming from both. (Video via NASA)

But they shouldn't have, at least according to Newton's laws of motion. In order for something to be pushed forward, something else has to be pushed backward. In the vacuum of space without air to push against, spacecraft have to use propellant or fuel to maneuver. (Video via University of Southern California, NASA)

The EmDrive doesn't use propellant. In fact, nothing is being pushed out the back of it at all. It supposedly gets its thrust by bouncing microwaves around inside a closed chamber, which physicists say absolutely should not work. A popular analogy is trying to move your car by sitting inside of it and pushing the steering wheel.

One explanation other physicists came up with last year was that the air around the EmDrive must have been interfering with Eagleworks' measurements, so this time they measured it in a vacuum. Guess what? It still seems to be working.

If propulsionless drives were proven to work, it would be revolutionary. Fuel is heavy, it's expensive and it takes up a lot of room. Plus, once it's gone, that's it: you're officially adrift. But a drive that only needed electricity could go on indefinitely. (Video via NASA)

What's more, it can keep moving faster. Without air to slow it down, a tiny amount of thrust — applied for a long time – can carry a spacecraft to another star system in just a few decades. It would take thousands of years with current technology. (Video via NASA)

The other Eagleworks discovery announced at NASASpaceFlight.com doesn't need much introduction. Thanks to the Star Trek franchise, most people already know what warp drive is. (Video via Paramount Home Video / "Star Trek: The Motion Picture")

In 2011, Dr. White made national news when he claimed warp drive might actually be feasible.

"In principle, a space warp would allow you to go to places like Alpha Centauri in time periods measured in weeks, months, as opposed to decades or centuries or millenia," White told Bloomberg.

Ever since, White has been working on a proof of concept, trying to create a tiny warp bubble at the Eagleworks lab. According to the forum post, he finally got a reading just a few weeks ago.

It would be hard to overstate just how amazing either one of these findings would be if they're confirmed.

In fact, they almost sound too good to be true, and that's why a lot of physicists think they probably aren't.

White based his warp drive theories off of a formula by Mexican physicist Miguel Alcubierre, who's been outspoken that he doesn't think warp drive is likely to ever be built. For one thing, it requires something called "exotic matter" which has negative mass, and so far that only exists in theory. (Video via Once Noticias)

As for EmDrive, critics accuse White of doing some handwaving in his paper on the topic last year. It said the thrust could come from "quantum vacuum virtual plasma," which isn't a thing in mainstream physics.

Critics also say White has been more than happy to reinforce the media's overhyping of his work, giving talks on how warp drive could take us to the stars. (Video via Students for the Exploration and Development of Space)

He even worked with a graphic artist to create mock-ups of a warp-ready spaceship, which were somewhat misleadingly reported as a new NASA spaceship design.

In the end, though, White's work is at least intriguing enough to get physicists to read it, and even his most vocal critics say they hope they're wrong. (Video via NASA)

And yes, the most likely explanation for his findings would be some kind of glitch, like when teams at the Large Hadron Collider saw particles move faster than light, and it turned out to be caused by a loose cable.

But come on! How can you not be excited about warp drive? And how hard would it be to take an EmDrive into space and see if it moves? What have we got to lose? Can you imagine zipping around in space ships like it's no big deal?