Is A Mercenary Army The Answer To ISIS In Syria? 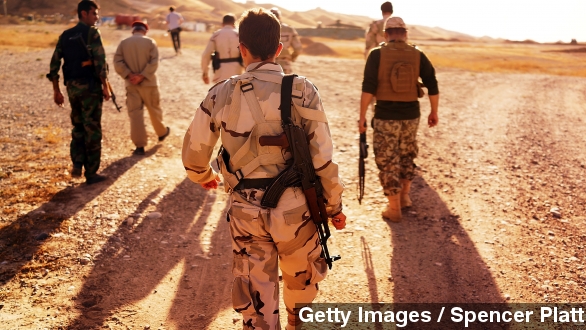 SMS
Is A Mercenary Army The Answer To ISIS In Syria?
By Ben Levin
By Ben Levin
October 13, 2014
Some think the U.S. should hire mercenaries to fight ISIS, while others are worried about those groups' effectiveness and the potential for abuse.
SHOW TRANSCRIPT

It's the only part of America's Syria policy anyone is sure about: no boots on the ground.

Fox News: "You've been adamant in saying we don't need American boots on the ground."

The White House: "I will not put American boots on the ground in Syria."

CNN: "No one that has the stomach right to put any of their boots on the ground."

Yet as ISIS solidifies its hold on northern Iraq and Syria, some conservative critics have an idea: If Obama won't put U.S. boots toe-to-toe against ISIS militants, maybe he should buy some new ones.

BILL O'REILLY VIA CBS: "The United States would train and pay well mercenary troops from all over the world. We would select them, the special forces would train them, 25,000 man force to be deployed to fight on the ground."

It would be a U.S.-funded mercenary army, and it's not just O'Reilly's idea. Former Blackwater CEO Erik Prince has called for the United States to "let the private sector finish the job" in Syria.

The argument is that mercenaries bring the best of both worlds to a nation that wants to see ISIS defeated but doesn't necessarily want to spill soldiers' blood doing it.

But detractors argue that mercenaries are unpredictable, and less accountable than the armed forces. Blackwater, the largest private security firm in the world, was accused by the FBI of killing 14 innocent Iraqi civilians in 2007.

They can also be difficult to control. A Blackwater manager in Iraq threatened to murder a State Department employee investigating the firm, causing the employee to cancel the investigation and return to the U.S.

Others argue that it's irresponsible for the U.S. to pass the burden of its security onto others.

DR. TOM NICHOLS VIA FOX NEWS: "This is a terrible idea. it's a terrible idea, not just as a practical matter but as a moral matter. It's a morally corrosive idea to try to outsource our national security."

And there's another problem: Mercenaries have been in Syria for years, and so far they haven't worked very well. The Huffington Post points to a 2013 incident when almost 300 Russians were contracted to fight for an oil company in Syria.

Upon arrival, The Interpreter reports the Russians were given a task: to retake some oil equipment from fanatical ISIS militants.

They attacked and were defeated, and the survivors barely made it home alive. The kicker? Because they failed, they didn't even get paid. (Video via NBC)

But don't close the door on the mercenary army just yet. After all, then-candidate Obama said in 2008 he wouldn't rule out the use of private contractors for warfare.