Is A Greek Exit From The Eurozone Inevitable? 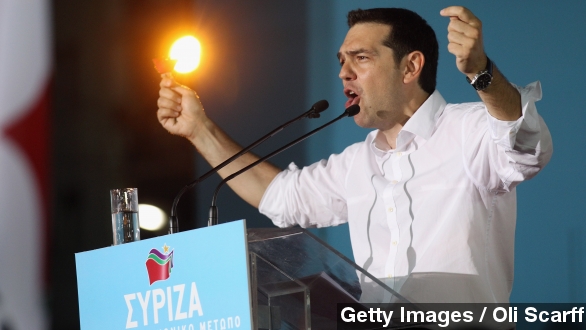 The anti-austerity Syriza party and its leader Alexis Tsipras are holding on to a lead in the polls ahead of this month's snap election in Greece.

The party wants to renegotiate the terms of its international bailout that included budget cuts and economic reforms, and that's raised speculation about whether Greece will have to leave the eurozone — a so-called "Grexit." (Video via Euronews)

Greece's prime minister has billed the elections as a referendum on the country's future in the eurozone, saying Syriza's policies would further strain an already tense relationship. (Video via BBC)

For its part, Syriza rejects charges that it would cause a split from the eurozone. But a pledge to end German-led austerity, or budget cuts, might not give them a choice. (Video via CBS)

As one analyst told CNBC: "Germany's been willing to continue to provide bailouts on the basis of the assumption that they're going to be repaid."

As Europe's biggest economy, Germany holds considerable sway over eurozone policy, and German leaders have been drawing a hard line for any new Greek government.

But he didn't comment on a report from Der Spiegel magazine that German leadership, including Chancellor Angela Merkel, was prepared to allow, or even force, a Greek exit from the currency union.

That sort of posturing was pretty much unthinkable in 2010 and 2012 when Greece received bailouts from international communities, which sparked protests in Athens. (Video via CNN)

The fear then was that a Greek exit could ripple through Europe's other weak economies causing the whole currency union to collapse.

That fear apparently no longer exists in Germany. As one government source told Der Spiegel, "The danger of contagion is limited because Portugal and Ireland are considered rehabilitated."

And that's led some analysts to view a Greek departure as inevitable if Syriza triumphs in the polls; a view that's not shared by party leader Alexis Tsipras. (Video via Brookings Institution)

In a recent speech Tsipras said if his party is elected, other European countries could follow Greece's lead to end austerity policies and bring balance to participation in the eurozone, something he called "necessary change." (Video via Deutsche Welle)

Syriza's lead has narrowed slightly in the run-up to the elections set for Jan. 25.