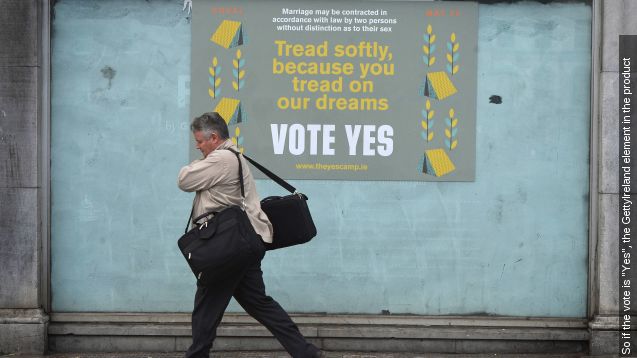 The Republic of Ireland made history Saturday by becoming the first country to legalize same-sex marriage by popular vote.

"A couple months ago we would have taken a very small yes vote a very small margin of victory, but now it looks like there's been a resounding yes across the country. And I’m just so proud to be Irish today," Ireland’s equality minister Aodhán Ó Ríordáin told ODN.

The vote passed with more than 62 percent voting in favor of amending the country’s constitution to allow for same-sex couples to marry.

Supporters of the constitutional amendment were confident of victory in the days before the vote, with polls showing them in the lead by 40-point margins and betting markets giving the no vote 8 to 1 odds. (Video via CBS News)

"I believe that ultimately everybody should be equal and this is just a way of extending the equality provisions in the constitution to other people who really should have had it anyway," an Irish voter told BBC.

"Vote no" campaigners, meanwhile, distributed leaflets and spoke to church groups about what they call the dangers of marriage equality.

"I mean I really hope the Irish people have not become so adrift of common sense that they actually don’t believe that a child deserves a mother and father anymore," Brian Flanagan said.

The head of the institute which ran the "No" campaign, conceded on Twitter, offering his congratulations.

The polls had tightened recently, but still gave the "Yes" vote a decisive lead on the day of the referendum. The "No" campaign claimed that a court ruling, punishing a baker that refused to make a "pro-gay marriage" cake, had given them a last second boost in the polls.

The referendum had high turnout, with many "Yes" voters coming home to vote in what they considered a historic election. (Video via Euronews)

The vote represents a rapid shift for the traditionally conservative and Catholic nation. Ireland was the last country in Europe to decriminalize homosexuality, doing so in 1993.