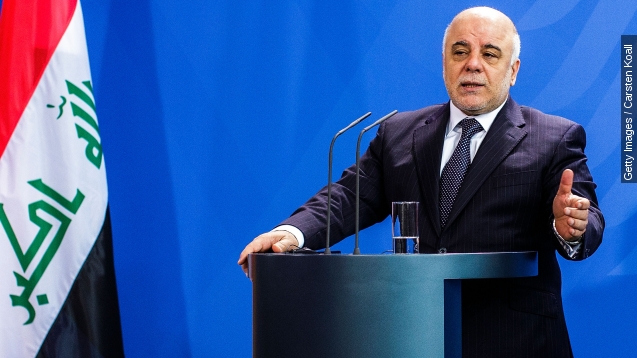 Iraq's Prime Minister Haider al-Abadi cut 11 members from his 33-person cabinet Sunday. The move is part of a broader attempt to clean out and unite the troubled country's government. (Video via ABC)

Just last week, al-Abadi announced he was cutting three vice presidential positions and setting up a committee to investigate corruption. Parliament has already given those reforms the OK.

The changes were announced after weeks of anti-government protests that put intense pressure on the prime minister. (Video via BBC News)

Iraq has its hands full as it continues to fend off attacks from ISIS across the country. Al Jazeera reports the terrorist group killed at least 15 soldiers with suicide attacks Sunday.

And now, former Prime Minister Nouri al-Maliki is being blamed for losing Iraq's second largest city to ISIS. A report by an Iraqi panel says al-Maliki increased tensions in the area that led to the fall of Mosul last year. The panel wants al-Maliki to go to trial over it. (Video via CBS, CCTV)

After receiving the report, a member of Parliament said, "No one is above the law and accountability to the people. The judiciary will punish perpetrators and delinquents."

Parliament still has to approve al-Abadi's latest round of reforms before they can be put in place. (Video via PBS)