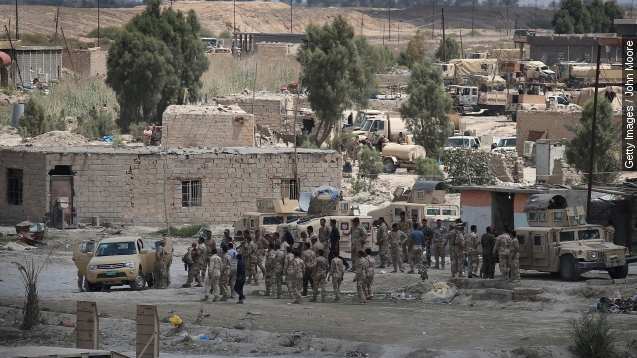 SMS
Iraqi Officials Say Ramadi Has Fallen To ISIS
By Steven Sparkman
By Steven Sparkman
May 17, 2015
A recent push by ISIS involving suicide attacks and car bombs resulted in Iraqi forces fleeing the city of Ramadi, according to regional officials.
SHOW TRANSCRIPT

After months of attacks by ISIS, Iraqi officials say the city of Ramadi, one of Iraq's provincial capitals, has fallen to the militant group.

A sudden push by ISIS over the past few days has left hundreds of civilians and Iraqi troops dead and resulted in Iraq's security forces abandoning the city, according to a spokesperson for Anbar's governor. (Video via Al Arabiya)

The news means that militants now control nearly all of Anbar province in western Iraq. They took control of the strategically important city of Fallujah in early 2014 and ramped up attacks against Ramadi in recent weeks. (Video via U.S. Central Command)

Iraqi Prime Minister Haider al-Abadi called on the security forces left in the province to stand their ground Sunday. He also told the Shiite militias that have been helping combat ISIS to prepare to take the fight into Anbar.

The militias, some of which are backed by Iran, proved a key ally in the fight to recapture the city of Tikrit earlier this year. But they had so far been deliberately kept out of the fighting in the Sunni-dominated Anbar province. (Video via RT)

The New York Times reports, "American officials had worried the militias could inflame sectarian tensions in the province and ultimately make it harder to pacify."

American officials downplayed Ramadi's strategic importance this week, saying they expect Iraqi security forces to eventually be able to take back the city.