Iraqi Army 'Will To Fight' Scrutinized After Fall Of Ramadi 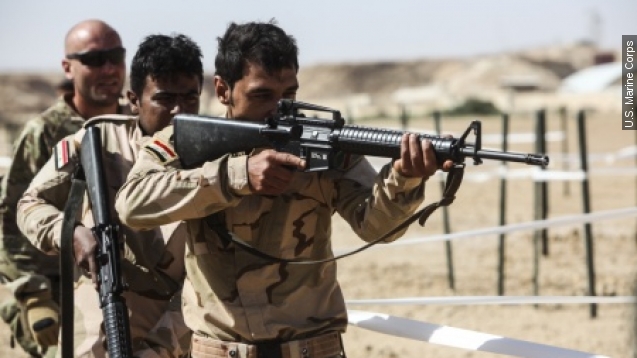 SMS
Iraqi Army 'Will To Fight' Scrutinized After Fall Of Ramadi
By Matt Picht
By Matt Picht
May 24, 2015
U.S. Secretary of Defense Ashton Carter has criticized the Iraqi Army's lack of will after Iraqi soldiers lost the city of Ramadi to ISIS this month.
SHOW TRANSCRIPT

The current U.S. plan for defeating the terrorist group ISIS hinges around building up the Iraqi Army's fighting capability.

But according to U.S. Secretary of Defense Ashton Carter, the Iraqi Army still has a long way to go.

Carter's comments come about one week after ISIS seized the city of Ramadi during a surprising surge. The defense secretary noted that Iraqi troops in Ramadi greatly outnumbered the attackers, but the soldiers fled the city anyway.

"Our army and our guys have the will to fight, but sometimes it is a battle and there are circumstances," a brigadier general in the Iraqi Army told the BBC.

It's a familiar pattern — ISIS was able to seize the city of Mosul last year after Iraqi soldiers laid down arms and abandoned their posts.

U.S. trainers have since been working with the still-young army to build the morale to combat ISIS. But Carter's comments suggest that collaboration isn't going as well as hoped.

One Iraqi lawmaker accused Carter of trying to unfairly shift blame onto the Iraqi government for Ramadi's fall, and claimed the U.S. isn't providing enough support, equipment and supplies to the country's military.

Many U.S. lawmakers have also been calling for an increased U.S. role in Iraq.

In the meantime, Iraq has begun relying on Shiite militias to help supplement its forces, something the U.S. fears could aggravate sectarian tensions and give rival Iran too much influence in the country. One spokesman said over 2,000 militia forces are joining Iraq's push for Ramadi.