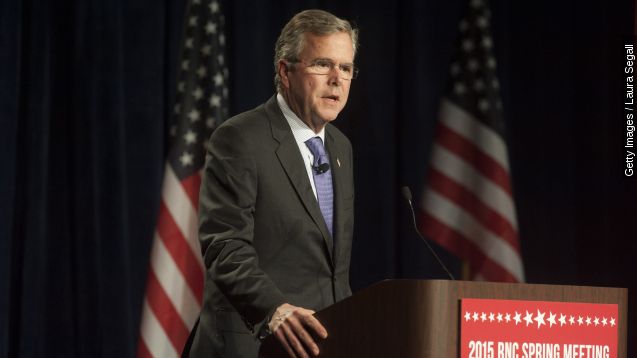 "Governor, if Kitty Dukakis were raped and murdered, would you favor an irrevocable death penalty for the killer?" debate moderator Bernard Shaw said.

"No, I don't, Bernard, and I think you know that I oppose the death penalty," presidential candidate Michael Dukakis said. (Video via CNN)

If Michael Dukakis' robotic and clumsy response to that question taught future politicians anything about hypotheticals, it's to avoid them when possible.

"I do not believe people running for president should engage in hypotheticals," Hillary Clinton said during a 2008 MSNBC debate.

"Let's not go into hypotheticals of that nature," Mitt Romney said during a 2012 debate. (Video via CBS)

Right about now, Jeb Bush is probably wishing he took the same approach.

"Knowing what you know now, would you have authorized the invasion?" Fox News' Megyn Kelly asked him May 11.

"I would have, and so would have Hillary Clinton," ​he replied.

"Jeb Bush has been trying all week to finesse his message," a CNN anchor said.

"If we're going to get back into hypotheticals, I think it does a disservice for a lot of people that sacrificed a lot," Bush said May 13. (Video via ABC)

"If we're also supposed to answer hypothetical questions, knowing what we know now, what would you have done, I would not have gone into Iraq," Bush said May 14. (Video via HLN)

Bush's defenders would call that question — the "how would you act if you knew what you knew now?" one — a gotcha question whose answer is largely irrelevant.

They have a point. Asking candidates how they would have responded over a decade ago to security threats in Iraq tells us little about how they'd respond under completely different circumstances today. (Video via Al Jazeera)

"If the United States has Al-Qaeda, bin Laden, top-level lieutenants in our sights, and Pakistan is unable or unwilling to act, then we should take them out," President Obama said during a 2008 debate.

That hypothetical scenario, as we know, became a reality.

No matter how unlikely …

"If you had a daughter that came to you who had been raped and was pregnant … " CNN's Piers Morgan said to Rick Santorum.

Hypothetical questions can be more be telling, so long as their answers aren't taken wildly out of context.

Otherwise, as Slate's John Dickerson writes, candidates will continue avoiding these questions for "fear their answers will be distorted."

Unless of course, you get the old "would you rather fight 100 duck-sized horses or one horse-sized duck?" — as the president famously did during a Reddit Ask Me Anything.

We’ll give him a pass on that one.

This video includes an image from the White House.