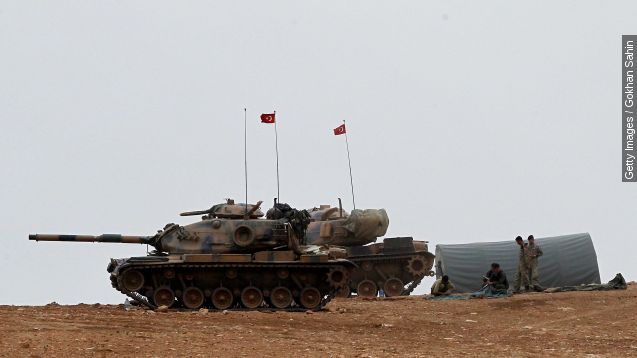 SMS
Iraq Chides Turkey For Moving Troops Near Mosul
By Matt Picht
By Matt Picht
December 5, 2015
Iraq says Turkey is infringing on its sovereignty by stationing troops near the ISIS-held city of Mosul. Turkey says it's just a routine procedure.
SHOW TRANSCRIPT

Turkey is sending a fresh contingent of troops to reinforce a camp near the ISIS-held city of Mosul in Iraq. Problem is, the Iraqi government doesn't want them there.

Iraqi Prime Minister Haider Al-Abadi described the influx of Turkish troops and weaponry as "a serious breach of Iraqi sovereignty" and called for their immediate withdrawal.

But Turkey says the deployment is just to train local peshmerga forces, staffing an established base camp that's been training Kurdish fighters to combat ISIS for more that two years.

The new battalion, comprised of about 150 soldiers and 20-25 tanks, is described by Turkey as a routine troop rotation, but the Iraqi government claims it wasn't consulted about the move beforehand — and it should have been.

Turkey's move lends more credence to the notion that its main Iraqi partner in the fight against ISIS isn't the Iraqi government, but the semi-autonomous Kurdish regions in the country's north, which have a history of supplying Turkey with much-needed energy.

But Turkey's relationship with the Iraqi Kurds has been complicated by their new offensive against Kurdish militants in Syria — something which has also prompted sovereignty complaints from Iraq in the past.