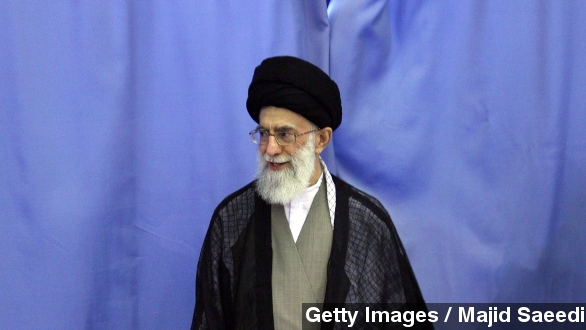 SMS
Iranian Leader Calls Out U.S. Lawmakers In Letter
By Kate Grumke
By Kate Grumke
March 12, 2015
Iran's leader called the letter 47 Republican senators sent him a sign of the "decay of political ethics" in the U.S.
SHOW TRANSCRIPT

You've already heard about the letter Republicans sent to Iran.

"Outrage over the GOP letter to Iran on the looming nuclear deal," Fox reports.

"It was just meant to be a cheeky JK, LOL," Chris Hayes said.

"Forty-seven Republican senators sign a letter written to the leaders of Iran and the White House and liberals go nuts," Sean Hannity said.

On Thursday, Iran's supreme leader responded, calling the letter "a sign of the decay of political ethics in the American system" — essentially criticizing not just the letter-writers but U.S. negotiations in general.

The Ayatollah said, "Of course I am worried, because the other side is known for opacity, deceit and backstabbing ... Every time we reach a stage where the end of the negotiations is in sight, the tone of the other side, specifically the Americans, becomes harsher, coarser and tougher. This is the nature of their tricks and deceptions." (Video via Khamenei.ir)

The letter pointed out that any nuclear agreement would be non-binding without congressional approval. And, the agreement could be undone after Obama leaves office.

This comes as the March 24 deadline for an agreement on nuclear talks is quickly approaching.

Iran's Mehr News quoted the Ayatollah as stressing that governments are bound to their commitments even after a leadership change.

While it is true that the agreement is non-binding, the Daily Beast quotes an Iranian op-ed that points out that the United States isn't the only party at the negotiating table. “So if the next [U.S.] administration or the Congress sabotage such an agreement, America will be isolated and discredited in front of other world powers.”

One of the other parties in the negotiations is Germany. On Thursday the German foreign minister also spoke out against the GOP letter, saying, "The negotiations are difficult enough, so we didn't actually need further irritations."

The German leader is just the latest in a string of people criticizing the 47 senators.

Even Senator John McCain, who was one of the 47, said the letter was a hastily-made decision.

“Maybe that wasn’t the best way to do that, but I think the Iranians should know that the Congress of the United States has to play a role," McCain said.

And predictably, members of the Obama administration have condemned the letter. Wednesday, Secretary of State John Kerry said he was in "disbelief."

"This letter ignores more than two centuries of precedent in the conduct of American Foreign Policy," said Kerry.

But despite the blowback, Senator Tom Cotton, who wrote the letter, is standing by his decision.

"I think this debate we're having is incredibly important and helpful to raising just what a bad deal President Obama is about to make with Iran," Cotton said.

Even with his critique of American politics, the Iranian Ayatollah still appeared to continue to support the negotiations. He said the Iranian negotiators were serving the country's interest.