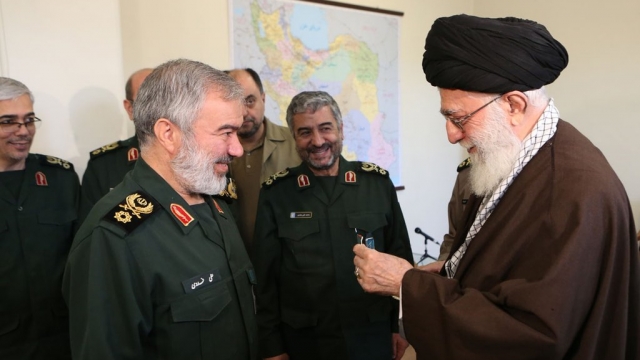 The boats reportedly drifted into Iranian waters after developing mechanical issues. The sailors were released a day later. (Video via Press TV)

Ayatollah Khamenei praised the IRGC for the arrest and credited divine intervention, saying it was "in fact an act of God, who brought the Americans into our waters so they would be arrested with their hands on their heads.”

But the former commander of the USS Cole sees the ceremony as little more than a pat on the back for the IRGC to keep Iran's military satisfied.

"Clearly, the Ayatollah knows where his bread gets buttered and where his military support comes from. He wants to make sure that the Iranian Republican Guard is fawned upon because, let's face it, they're the underpinnings for him. They're the ones that are going to keep the Ayatollahs in power," Kirk Lippold said. (Video via Fox News)

Although the detainment ended quickly and peacefully, many were still upset when footage of the captured sailors was released. Secretary of Defense Ash Carter said the footage made him “very, very angry” and it soon turned into a political talking point.

“If I am elected president, no serviceman or servicewoman will be forced to be on their knees, and any nation that captures our fighting men and women will feel the full force and fury of the United States of America,” Ted Cruz said at a Republican debate. (Video via Fox Business)

The one-day capture is pretty brief compared to 2007, when 15 British servicemen were detained in the Persian Gulf, paraded in front of Iran’s president and held captive for almost two weeks. (Video via Khamenei.ir)