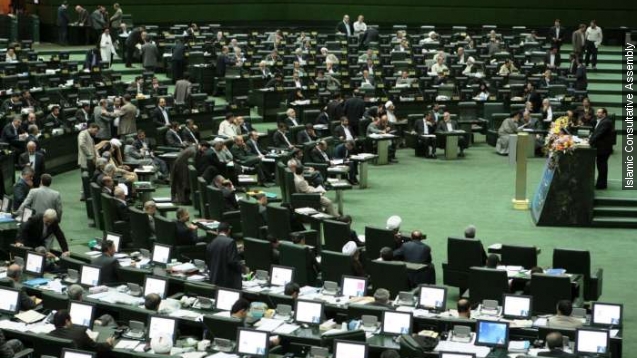 By Matt Picht
June 21, 2015
As the latest deadline for negotiations over Iran's nuclear program looms, the country's parliament has put forward a bill that could hinder talks.
SHOW TRANSCRIPT

Negotiators working on hammering out a deal between Iran and six world powers over the country's nuclear program are running up against another deadline at the end of the month — and Iran's parliament looks like it's about to throw a wrench in the works.

The parliament overwhelmingly approved a draft of a new bill that would restrict the terms of any potential nuclear deal. Among the requirements are a demand that economic sanctions be lifted immediately and a ban on international inspections of Iran's military sites.

Those requirements could be a deal breaker. Western powers have insisted sanctions can only be phased out over time as Iran fulfills its obligations and that access to military sites is an essential part of verifying those obligations.

The bill hasn't passed into law just yet; a finished version of the text still has to make its way through parliament and a council of leaders close to Ayatollah Khamenei. But the legislation puts significant pressure on Iran's nuclear negotiators.

The latest self-imposed deadline for a final nuclear deal is June 30. There's been very little optimism that negotiators will reach a final accord by the deadline, which could prompt another extension. (Video via Press TV)

In applying domestic pressure to its negotiators, Iran's legislature is mirroring moves from the U.S. Congress. Last month President Obama signed a bill giving Congress oversight and voting power over any nuclear deal.

That's one consequence Iran's negotiators don't have to worry about — the draft bill Iran's legislature passed Sunday also includes a provision ceding authority over the final deal to a council controlled by the Ayatollah.

This video includes images from the Islamic Consultative Assembly.