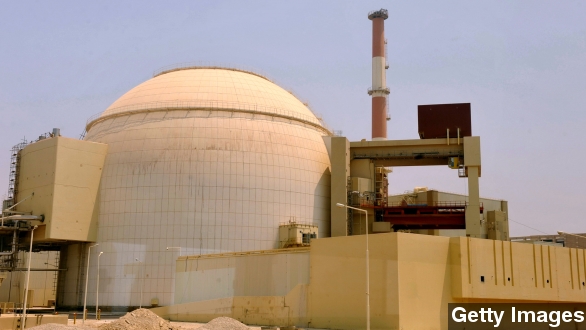 SMS
Iran Nuclear Deal Hits Snags As Deadline Approaches
By Jake Godin
By Jake Godin
March 20, 2015
The Iranian nuclear deal has hit some obstacles before its March 31 deadline, but both sides have said some progress is still being made.
SHOW TRANSCRIPT

"Now it's up to all of us, Iranians and Americans, to seize this moment and the possibilities that can bloom in this new season. Thank you and nowruz-etan pirouz," President Obama said in a New Year's video to the Iranian people and their leaders.

President Barack Obama sent a message to Iranians on Thursday night as U.S. and Iranian diplomats met in Switzerland. His goal, of course, was to sell them on the idea of a nuclear deal. (Video via Press TV)

March 31, the deal's political deadline, is quickly approaching, and yet negotiations are stuck in limbo as U.S. Secretary of State John Kerry and his Iranian counterpart, Javad Zarif, attempt to hash out the final details. (Video via Al Kout News)

The U.S., U.K., France, Russia, China and Germany, also known as the P5+1, want to ensure Iran has no way to produce nuclear weapons in the future. (Video via European External Action Service)

To ensure this, Iran would be subject to thorough inspections by the United Nations' nuclear oversight agency, be required to reduce its nuclear stockpile and be limited on the number of centrifuges it can use to enrich uranium. (Video via U.S. Department of State)

What Iran wants is a little more straightforward — the ability to pursue what it says is a peaceful nuclear energy program and for the host of international sanctions against the country to be lifted sooner rather than later. (Video via Iranian Ministry of Foreign Affairs)

Iran wants immediate sanctions relief from the U.N.; the West wants to wait until Iran at least gets a pass from the U.N.'s International Atomic Energy Agency — something that could take up to two years.

A draft for the deal leaked earlier this week pinned Iran's centrifuges limit at 6,000, or about 4,000 less than what Iran currently has and about 5,000 more than what the U.S. originally wanted. Both sides have denied such a deal has been worked out. (Video via IRIB News)

But not everything is gummed up in the negotiations — critics in the U.S. have backed off in recent days. Senate Democrats and Republicans have agreed to delay a vote on legislation that would force the president to submit any potential deal to Congress for approval. (Video via U.S. Senate Committee on Foreign Relations)

Both Kerry and Zarif have said the negotiations are making progress but also that there's still a lot of work left to be done before the deadline at the end of the month. The final deal would be due by the end of June.