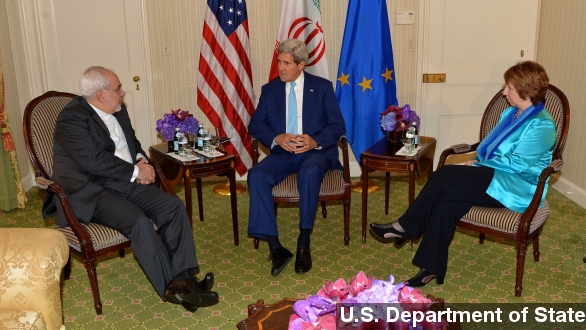 SMS
Iran Nuclear Deal Deadline Looms Ahead Of Latest Talks
By Matt Picht
By Matt Picht
November 16, 2014
Talks to freeze Iran's nuclear program are running up against a deadline, as negotiators meet to try and hammer out an extension.
SHOW TRANSCRIPT

PRESIDENT OBAMA VIA THE WHITE HOUSE: "For the first time in nearly a decade, we have halted the progress of the Iranian nuclear program."

It’s been almost a full year since the president made that announcement, as Iran and six leading countries cemented a deal that would freeze the country's nuclear program in exchange for some sanction relief.

That deal was meant as a stepping stone for a more comprehensive nuclear agreement. But after multiple rounds of talks and one deadline extension, that agreement still looks as elusive as ever — and time is running out.

International negotiators have just one more summit in Vienna Tuesday to strike an accord before the Nov. 24 deadline. And a lot of issues are still standing in the way.

The West wants to push back Iran’s potential to develop a nuclear weapon and subject the nuclear program to increased scrutiny. For its part, Iran doesn’t want to scrap any part of the nuclear program that’s consumed a lot of the country’s money, time and national pride.

But it’s also unlikely that either side wants to give up on the talks. The New York Times notes the failure to come to an agreement could have disastrous political consequences in Iran, weakening moderates and energizing hardliners.

The most likely outcome is another deadline extension, which would buy both sides more time to reach an agreement. But the world won’t wait for a nuclear deal forever, and another round of negotiations faces new political challenges.

Chief among them is the newly-elected Republican Congress. Many GOP leaders are skeptical about reaching a deal and have bitterly opposed Obama on negotiations.

SEN. LINDSEY GRAHAM VIA FOX NEWS: "My biggest concern is that Obama wants a deal with Iran way too badly."

Republican Senator Lindsey Graham, a staunch critic of the talks, is planning to introduce a bill requiring Obama to submit any deal with Iran to Congressional review. It’s unlikely to go anywhere in the current Democratically-held Senate, but a GOP-controlled Senate would be a different matter entirely.

Iranian President Hassan Rouhani is also facing domestic pressure from his country’s hardliners who view the negotiations as a “humiliating” bargaining away of Iran’s nuclear enrichment rights. (Video via NBC)

Complicating the issue even further is a different nuclear deal recently inked between Russia and Iran, which allows Russia to build eight new nuclear reactors in Iran.

The deal is sanctioned by the U.N.’s nuclear watchdog agency, and could provide some international assurance that Iran’s program is being used for peaceful purposes only.

One analyst told The Guardian emerging from negotiations in Vienna without some signs of progress will only make it more unlikely that future talks will bear any fruit.

"If you put this off six months, does Obama come back stronger able to deliver a deal? Does Rouhani? No. My hope is that at the last moment they stare into the abyss and realise the consequences of not doing a deal now are very, very bad."

Ahead of the Vienna talks, many analysts predict negotiators will try to reach a modest agreement, possibly extending the deadline while solidifying some of the points where both sides are in agreement.