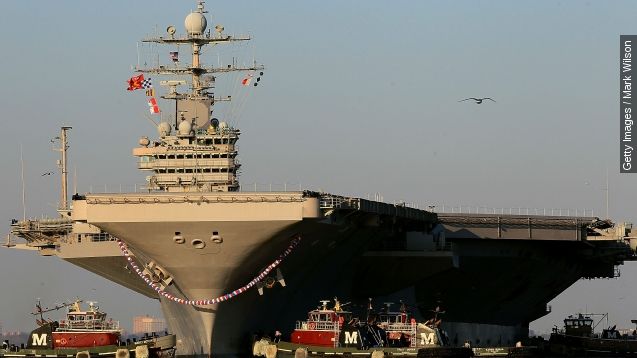 As if U.S. and Iranian relations weren't complicated enough, a live-fire exercise Iran conducted near American troops this week could be making matters worse.

In a statement Wednesday, a spokesman for the U.S. Fifth Fleet said, "Firing weapons so close to passing coalition ships ... is unsafe, unprofessional and inconsistent with international maritime law."

The fleet wasn't in Iranian waters at the time, and there is no evidence the troops were targeted.

The Strait of Hormuz is an area that's no stranger to tense events like this. In April, 11 unguided rockets were fired about 6 miles from the USS Theodore Roosevelt. Most famously and tragically, in 1988, the USS Vincennes thought it was under attack and ended up firing on an airliner heading to Dubai, killing all 290 people onboard. (Video via The Wall Street Journal)

Provocations like this will further concerns some members of Congress have about the landmark deal on Iran's nuclear program, especially the sanction relief part of the agreement. Democratic senators sent a letter to the president just last week with concern about recent Iranian missile launches.

The U.S. disagrees, saying the Treasury's right to "blacklist Iranian entities allegedly involved in missile development" is a separate activity from the nuclear deal's provisions.

So far, there's been no official comment on the latest missile launch from Iran, but state-run news agency Fars said the incident was planned and all vessels in the area were warned ahead of time.