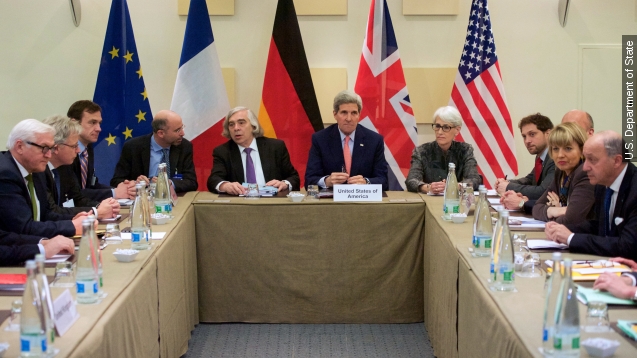 SMS
Iran Deal's Sanction Plan Could Affect Oil Prices
By Kate Grumke
By Kate Grumke
June 25, 2015
A nuclear deal with Iran could bring the global market an influx of Iranian oil, but when and how sanctions are lifted could also affect oil prices.
SHOW TRANSCRIPT

The deadline for a nuclear deal with Iran is June 30, and if an agreement is reached, that would mean, eventually, an end to certain sanctions against Iran. Iranians were pretty excited about that after the framework deal was agreed on.

That's because the sanctions have crippled Iran's oil-driven economy. Oil exports are believed to make up about 80 percent of Iran's total exports, and those exports have been cut almost in half since 2011. And Iran is believed to have the world's fourth-largest reserves. (Video via Press TV)

So the prospect of sanctions being a thing of the past, and a sudden outpouring of Iranian oil, has led some to predict it would push global oil prices lower.

"Iran could add something like another 800,000 barrels a day to the market within, let's say, six to nine months, and it could release also oil from storage within a period of one to three months after sanctions ease," energy strategist Robin Mills told CNN.

Even though Iran has the potential to pump a lot of oil into the global market, the actual timeline for lifting sanctions could have a big effect on whether or not we'll see a dramatic change in prices. Iran hopes sanctions will be lifted immediately, but the six parties negotiating the deal with Iran are pushing for that to happen gradually. (Video via Manoto1)

"We have about a million barrels, barrels of Iranian [oil], that are off the market because of sanctions, so the question is what's the speed of recovery. ... So you could have a deal and then another six to 12 months before sanctions start to get removed," commodities strategist Helima Croft told Bloomberg.

And the U.S. reportedly wants to have the option to put at least some of the sanctions back in place if Iran violates any part the nuclear deal. (Video via U.S. Department of State)

But The Washington Post points out that's a sensitive matter: "One view is that the United States and its allies do not want to wreck a deal that took so long to negotiate for a relatively minor violation that can be fixed. But at the same time, the administration does not want to construct a deal that signals to Iran that violations are acceptable."

Last week, with a deal looming, Forbes analysts lowered their price estimate for crude oil this year, saying if Iran shirks its sanctions, it will likely ramp up its oil production and offer lower prices to gain a foothold in an oversupplied market.

Officials have said the negotiations could continue past the June 30 deadline. After July 10, Congress has 60 days — rather than 30 — to consider the agreement.