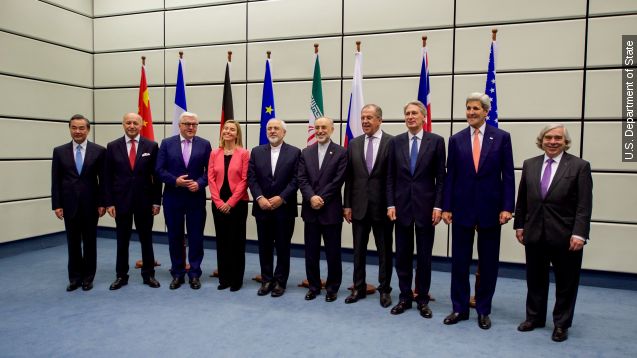 SMS
Iran And 6 World Powers Agree To Historic Nuclear Deal
By Jake Godin
By Jake Godin
July 14, 2015
Iran and six world powers have agreed on a historic nuclear deal after more than a year of negotiations.
SHOW TRANSCRIPT

The Iran nuclear talks are over. (Video via European Commission)

"I think this is a sign of hope for the entire world and we all know that this is very much needed in these times," European Union foreign policy chief Federica Mogherini said.

In one of the biggest diplomatic accomplishments in our time, Iran and six world powers have come to an agreement on the Iranian nuclear program after more than a year of negotiations. (Video via European Commission)

"Today could have been the end of hope on this issue. But now we are starting a new chapter of hope," Iranian foreign minister Javad Zarif said during the announcement.

Each side had their goals: Iran wanted crippling international sanctions to be lifted, and the six world powers wanted to prevent the country from being able to build a nuclear weapon. (Video via European Commission)

This agreement ideally will have accomplished that, though it still requires commitments from both sides and Iran's nuclear activity will be closely monitored.

Under the deal, Iran will get rid of the bulk of its enriched uranium reserves, be limited on how much it can enrich uranium, give unprecedented access to the International Atomic Energy Agency for inspections and remove two thirds of its centrifuges. (Video via Islamic Republic of Iran Broadcasting)

Iranian President Hassan Rouhani boasted his country had gotten a good deal in a televised statement and said Iran has never sought to build a nuclear bomb. (Video via Islamic Republic of Iran News Network)

Israel’s Prime Minister Benjamin Netanyahu was not pleased with the agreement. In a statement, he called it a “historic mistake for the world."

"I am confident that this deal will meet the national security of the United States and our allies. So I will veto any legislation that prevents the successful implementation of this deal," President Obama said after the agreement was announced.

The U.S. Congress now has 60 days to review the deal and either approve or reject it. While a few sticking points may make the review especially contentious, Obama has promised to veto any attempt to block the deal from being completed.

This video includes images from Getty Images music from Chris Zabriskie / CC BY 3.0.