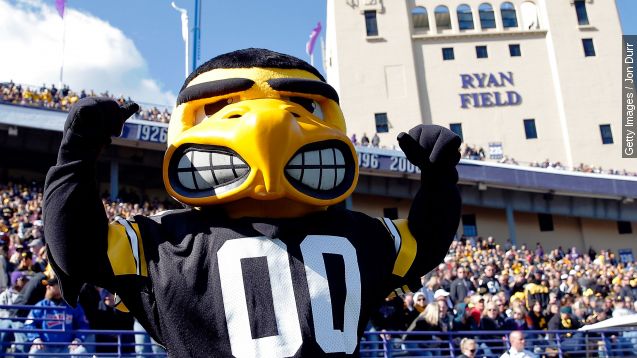 What do you do when going undefeated just isn't good enough?

But two teams on the outside looking in are doing whatever they can to get into the invite-only party — 10-0 Iowa and 10-0 Oklahoma State sit fifth and sixth overall.

And while their records are perfect, it's tough to argue they should bounce one of the one-loss teams already entrenched in the top four.

Both Alabama (1) and Notre Dame (9) rank in the top 10 when it comes to strength of schedule.

And yes, even though Alabama and Notre Dame have losses, they also have high-profile wins. Alabama has fives wins over ranked opponents and Notre Dame has two. (Video via ESPN / College Football Playoff)

Iowa is 2-0 over ranked opponents, seemingly not enough to overthrow the Irish. And Oklahoma State owns one.

That's not to say there's not time for things to change, though. There are still two to three games left in the season, and some tough matchups remaining.

Oklahoma State perhaps has the strongest case should they win out. They've got 8-1 Baylor and 9-1 Oklahoma for their final two games. Wins over both would give them three wins against ranked opponents.

Although a non-existent Big 12 championship game isn't doing them any favors.

Iowa undoubtedly needs to stay perfect against its next two opponents, 2-8 Purdue and 5-6 Nebraska. If they do, they could control their own destiny.

They could end up playing Ohio State in the Big 10 championship game, a matchup that would seemingly work as a play-in game to the playoffs for the winner.

The College Football Playoff semifinals begin Dec. 31 at the Orange Bowl and Cotton Bowl. There's still plenty of time for things to happen.