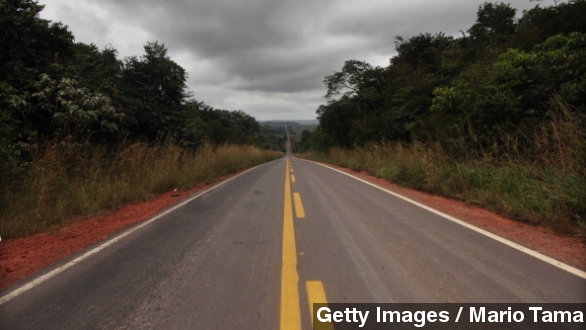 SMS
Iowa Man Walks 35 Miles To Work, 8 Hours Each Way
By Becca Dunn
By Becca Dunn
March 6, 2015
Steve Simoff of Davis City, Iowa, walks about 35 miles to work, then retraces his steps after his shift. It takes him about eight hours each way.
SHOW TRANSCRIPT

A 35-mile-commute doesn't sound too far ... until you hear somebody is making it all on foot.

"Fox & Friends" anchor Elisabeth Hasslebeck asked Simoff Friday morning, "Do you wake up on some days and think, 'I don't want to do this'?"

Sixty-one-year-old Steve Simoff makes that long trek along a highway from Davis City to Osceola, Iowa, regardless of the weather.

According to the Des Moines Register, Simoff leaves home at 3 p.m. to get to his overnight shift as a janitor by 11 p.m.

He says he never puts his thumb up to hitch a ride, but sometimes people recognize him and offer him a lift.

Simoff's incredible story has quickly spread — money is tight right now, so to save on gas, he walks. His priority is his family — his wife suffered a stroke and two heart attacks.

But now a GoFundMe page was made on his behalf. As of Friday it had raised more than $14,000, far exceeding the $5,000 goal. The page had only been active for four days.

We've heard other stories of people making similar commutes on foot. James Robertson of Detroit recently made the news for walking 21 miles round-trip to get to and from work.

"They say that if there's a will, there's a way. That's something I'll never forget," he said.

Simoff actually doesn't think his long walk is anything extraordinary and was surprised his story has gained so much attention.