IOC Settles On Beijing For The 2022 Winter Olympics 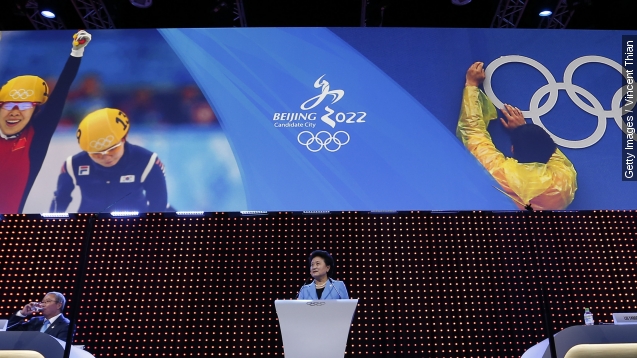 The Olympic Games that no one seemed to want to host will now take place in Beijing.

The International Olympic Committee chose Beijing over Almaty, Kazakhstan as the host city for the 2022 Winter Olympic Games.

The two cities were the only ones left in the running after four others pulled their bids late in the game including Kraków, Poland, Lviv, Ukraine, Oslo, Norway and Stockholm, Sweden. Beijing now becomes the first city selected to host the summer and winter Olympics. (Video via Beijing 2022)

The city last hosted the games in 2008 where pollution proved to be a major concern.

"This is the air Beijing woke up to this morning. ... It's hard to think you could run a marathon or race your bike through this," BBC reporter James Reynolds said.

Beijing is estimating about $3-$5 billion dollars to build needed infrastructure for the games, far less than the some $50 billion Russia sunk into Sochi for the 2014 games. (Video via New China TV)

The games will be based in Beijing, but many outdoor, snow-based events will take place more than 100 miles northwest of the city. (Video via GBTimes)