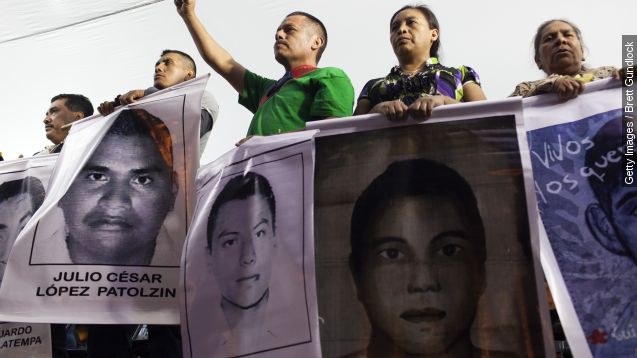 SMS
Investigators Reject Mexico's Theory About Missing Students
By Matt Picht
By Matt Picht
September 7, 2015
A new report pokes holes in the official theory about what happened to the 43 Mexican students who were kidnapped in Iguala last year.
SHOW TRANSCRIPT

Almost one year ago, 43 students who were protesting job discrimination disappeared near the Mexican city of Iguala.

The Mexican government's official theory is that the students were abducted, killed and cremated by a local gang. But an independent investigation says that theory is full of holes. (Video via TeleSur)

In particular, the new report challenges the government's assertion that the cremation took place at a garbage dump. The remains of one student were identified at the landfill in December of 2014. (Video via Univision)

But fire expert Jose Torero said there was no evidence at the scene of a fire large enough to cremate all 43 students. He estimates the gang would have needed 13 tons of diesel, 20 tons of wood and over 60 hours. (Video via University of Edinburgh)

The Mexican government has taken the criticism seriously: Mexico Attorney General Arely Gomez promised to reopen the case, and Mexican president Enrique Peña Nieto thanked the investigators for their work on Twitter. (Video via Government of Mexico)

That's because the Iguala disappearances have become a political liability for Peña Nieto's government. Protesters have criticized the government's handling of the case, alleging the investigation was handled poorly to cover up for officials involved in the abductions. (Video via Fusion)

The new report does not identify where the missing students could be, but does offer several avenues for further investigation.