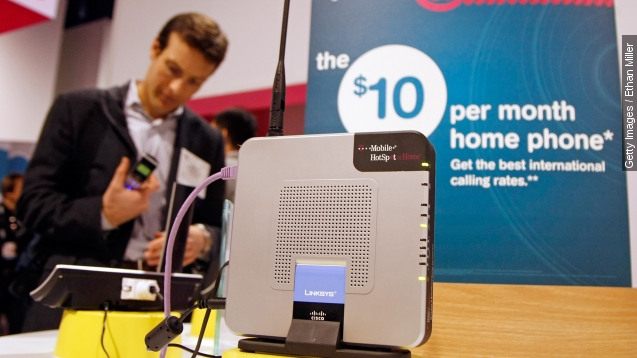 Tom Wheeler of the Federal Communications Commission wants to add stand-alone Internet to the list of services Americans can get help paying for through the Lifeline subsidy program. (Video via C-SPAN)

Why? Because in the mid-80s — when Ronald Reagan dreamt up the program— the technology that connected people was the landline phone. (Video via Ronald Reagan Presidential Foundation and Library)

In 2005, that technology was the cell phone, so the FCC made cell service eligible for the subsidy. (Video via Microsoft)

Now, the Internet is what keeps people connected. (Video via TeraGo Networks)

But more importantly — the Internet helps people get jobs.

At least that’s what top FCC officials have said leading up to Wheeler’s announcement.

A study from the Pew Research Center explored who used the Internet in 2014.

The center found those with higher incomes are more likely to get online.

There's no proof that what Pew found was a causal relationship, but it does make sense that Internet access could open more doors to low-income Americans.

And Internet service is already being subsidized through the Lifeline program in some cases, but there's a catch.

The way it works now, those who participate must bundle home phone and Internet service — meaning both would technically qualify for the subsidy, though The Washington Post says right now a household is only subsidized $9.25 each month. (Video via Verizon)

But that probably doesn’t even begin to cover the cost of most Americans' home Internet bills.

Even The New York Times points out, "Debate over just how far a $9.25 credit can go in covering the cost of broadband is sure to arise."

The Lifeline program is funded by fees that landline and cellphone customers pay, and currently, the total subsidy available is $1.7 billion.

There's no word yet on whether the subsidy could increase to cover the cost of more expensive Internet service — if the proposal passes.

This video includes images from Getty Images and music from Nicholas Cheung / CC BY NC SA 3.0.