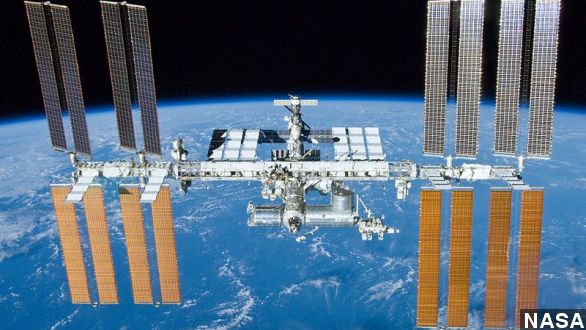 If you think hunting for a parking space at the mall is bad, try finding one at the International Space Station.

ISS crew members have just finished the first of three spacewalks that will free up more room for docking spacecraft in the future.

Wilmore and Virts worked on Harmony, which is one of the station's utility nodes. It's loaded with power and communications gear, and connector ports for other modules or docked spacecraft.

But first, they had to get there from an airlock on the other side of the ISS, and doing work in space is about as far from a walk in the park as you can get. NASA carefully plans out each move astronauts make outside the station. All told, they spent six hours and 41 minutes on the job.

The new adapters themselves will arrive at the station later this year. They'll serve as parking slots for spacecraft from SpaceX and Boeing.

SpaceX's Dragon 2 and Boeing's CST-100 are part of NASA's commercial crew program, an initiative to bring NASA's manned launches back to the U.S.

The last manned mission from U.S. soil was the launch of the space shuttle Atlantis in July 2011. It was the final flight of NASA's shuttle program. (Video via NASA)

Since then, NASA astronauts have hitched rides aboard Russian rockets, where a round-trip seat costs more than $75 million.

Manned launches from U.S. facilities are expected to be at least a bit cheaper when they start in 2017: NASA’s mission budget breaks down to about $70 million per seat.

But the ISS has to get its docking rings first. The next maintenance spacewalk is planned for Wednesday, Feb. 25.

This video includes images from NASA and Daniel Oines / CC BY 2.0.