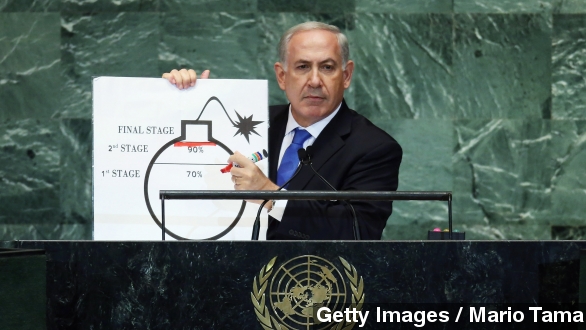 A major security breach at South Africa's intelligence agency has put hundreds of classified and top secret documents in the hands of investigative reporters at Al Jazeera and The Guardian.

The files, which date from 2006-2014, come from intelligence agencies all around the world, including the CIA, MI6 and Israel's Mossad among others. Al Jazeera is publishing the documents as "The Spy Cables," with production values to match.

There's plenty of information to dig through in the documents published so far, and Al Jazeera has promised more revelations to follow. But for now, the big takeaway seems to be about Israel.

"By next spring, at most by next summer, at current enrichment rates, they will have finished the medium enrichment and moved on to the final stage," Netanyahu said.

But a Mossad report published a month later apparently contradicts these claims, stating; "Though Iran at this stage is not performing the activity necessary to produce weapons,  it is working to close gaps in areas that appear legitimate such as enrichment reactors."

Now, Al Jazeera is portraying this report as more evidence of a rift between Netanyahu and his former spy chief.

"Mossad Chief Meir Dagan hinted at a disagreement with Netanyahu earlier that year. He was clear: an attack on Iran is not the right way."

But the Israeli press has so far been pretty lukewarm about the significance of this story; one Haaretz reporter suggested on Twitter the Mossad document "does not contradict Netanyahu at all. No story what so ever."

It's an academic point, in any case; Iran's stockpile of 20 percent enriched uranium, which was at the heart of Netanyahu's warnings, was consigned to the scrap heap as part of an international agreement brokered in 2013.

Other documents published Monday reveal South Africa's concerns about Iranian spying activities in their country, and the U.K.'s attempts to enlist South Africa in recruiting a North Korean spy.