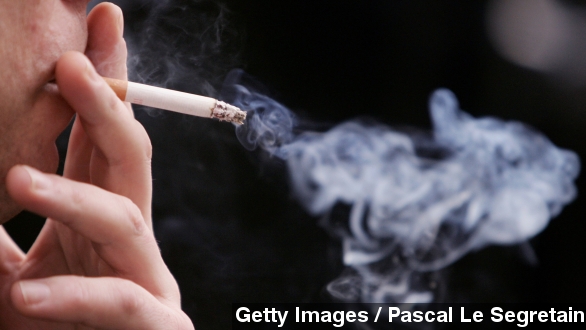 SMS
Institute Of Medicine Recommends Raising Smoking Age To 21
By Christine Slusser
By Christine Slusser
March 13, 2015
Some cities have already raised the minimum smoking age, and one prominent medical group wants the rest of the country to make the change.
SHOW TRANSCRIPT

But that last one could become a thing of the past. A committee at the Institute of Medicine recommends raising the legal smoking age to 21.

This comes after it released a report saying this change would improve the health of Americans and delay the start of tobacco use.

The government-commissioned study says tobacco use among 18- to 24-year-olds "poses serious concerns." It also says 98 percent of people who have ever smoked tried their first cigarette before they were 25 years old. Cigarette use is also highest in the 21-25 age range.

Researchers specifically looked at raising the smoking age to 19, 21 and 25. They concluded raising the legal age by just one year wouldn't be enough.

The researchers pointed out 21 was the magical number instead of 19 because teens under 15 could still have friends or co-workers who were 19. In other words, easy access. People in the 21 age range tend to be less connected with the 15-year-old crowd. (Video via U.S. Food and Drug Administration)

The study says changing that age could prevent 249,000 premature deaths and lead to "45,000 fewer deaths from lung cancer" in people born between the new millennium and the year 2019. It also says there would be 12 percent fewer smokers by 2100.

Federal law says 18 is the minimum age to buy a pack of smokes, but cities and states can still raise the age on their own.

But not everyone is gung-ho about the trend to raise the smoking age.

A writer for The Wire called the idea "pointless."

The Food and Drug Administration says smoking is the cause of 443,000 deaths in America every year and that smokers die around 14 years earlier than nonsmokers.

The FDA also says 3,500 kids start smoking every day, and 850 of them will stick with the habit.