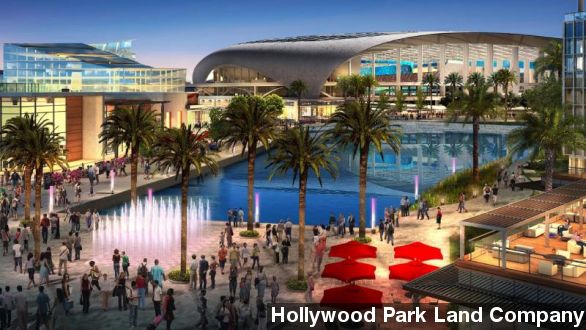 Stan Kroenke owns the St. Louis Rams, plans to build a stadium on land he owns in Los Angeles and now has the approval of the local government to do so.

"Make it happen; we'll show up," a supporter said at the City Council meeting.

"They came in droves, packing the council chambers and then the overflow room in City Hall," KCAL reported.

Inglewood City Council approved a proposal Tuesday night to begin the development of a new $2 billion football stadium. The 5-0 council vote bypassed the need for a public vote on the matter, meaning the city is fast-tracking the project.

Predictably, the news wasn't met with as much excitement in St. Louis.

"It's a development many Rams fans here in St. Louis likely will not want to hear," a KSDK anchor said.

"And video you're about to see that you don't want to see either, if you're like me," her co-anchor said. "The Inglewood City Council has approved a plan to build an NFL stadium."

St. Louis released plans last month to build a $985 million, 64,000-seat stadium on the riverfront in an attempt to keep the Rams in the city.

Late last week, the San Diego Chargers and Oakland Raiders officially stepped more into the mix for a move to LA with a stadium proposal of their own.

The Inglewood stadium project could cost up to $2 billion. The NFL would still need to approve any relocation if Kroenke does decide to move the team.