'Inferno' Goes Down In Flames As 'Madea' Tops The Box Office ... Again 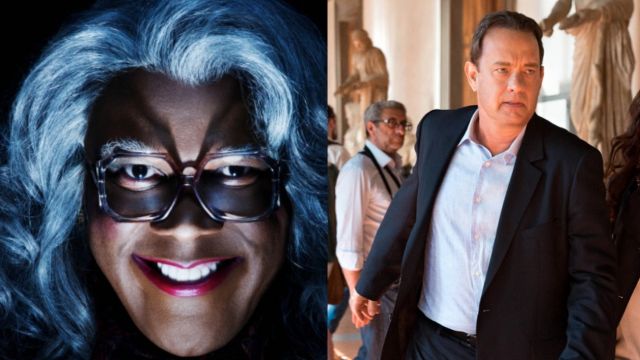 SMS
'Inferno' Goes Down In Flames As 'Madea' Tops The Box Office ... Again
By Jamal Andress
By Jamal Andress
October 30, 2016
Tom Hanks rarely plays second fiddle at the box office to anyone (much less Madea), but that's exactly what he's doing this weekend.
SHOW TRANSCRIPT

I don't say this a lot, but just stay home this weekend. The pickings at the multiplex are slim.

Holding on to No. 1 this weekend is "Boo! A Madea Halloween" bringing in an estimated $16.6 million. Tyler Perry's latest is just as bad as it looks, but box office competition is practically nonexistent which has helped the film stay at the top.

Also, it is Halloween weekend. And for those of you who want to see a movie that's Halloween-related, you really only have two options. Madea or this very frightening little girl. So blame the Halloween crowd (or lack thereof) for Madea's impressive sophomore weekend.

Tom Hanks very rarely plays second fiddle at the box office to anyone (much less Madea), but that's exactly where he finds himself this weekend as "Inferno" goes down in flames bringing in just $15 million in its domestic debut.

"Inferno" is the third installment in the Robert Langdon film series after "The Da Vinci Code" and "Angels and Demons."

This is not a film series that's critically acclaimed, but at least it's usually popular at the box office. "The Da Vinci Code" had a $77 million debut in 2006. Ten years later, "Inferno" can't even pull in a quarter of that.

Wrapping up the mediocre cinema this week is Tom Cruise's "Jack Reacher: Never Go Back" bringing in an estimated $9.5 million. After two weeks in theaters, Mr. Reacher has managed a worldwide box office total of $93 million.

As for next week, the box office gets a pulse again. Marvel is back.