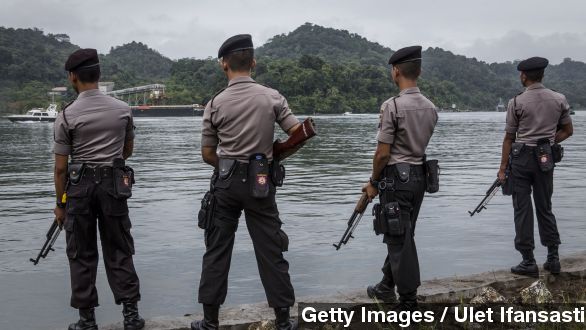 Two Australian citizens remain on death row in Indonesia after negotiations between their home country and Indonesia failed.

Myuran Sukumaran and Andrew Chan were convicted in 2005 as part of the “Bali Nine” — a drug smuggling group which Indonesia claims Chan and Sukumaran were the ringleaders of. (Video via SBS)

On Wednesday, the duo were moved from their Bali prison to Nusakambangan Island, also known as the Alcatraz of Indonesia and a sign their execution by firing squad is imminent, because the island is where the country carries out most of its executions.

“We abhor drug crime, but we abhor the death penalty. We think that these two Australians deserve to be punished but they certainly don’t deserve to be executed,” Australian Prime Minister Tony Abbott said during a news conference.

Australia’s Foreign Minister Julie Bishop proposed a prisoner swap to save them earlier this week. But on Thursday, Indonesia rejected the deal.

“We are not trigger happy. We do it for a very big reason. I am sad to see the situation,” said Najib Riphat Kesoema, Indonesia’s ambassador to Australia.

Speaking to CNN, a spokesperson for Indonesia’s Ministry of Foreign Affairs said there is no legal framework for a prisoner swap in his country.

Since their arrest a decade ago, Chan and Sukumaran have repeatedly appealed against their sentence to no avail. Indonesia’s president has reportedly said the executions won’t be this week but will be soon.