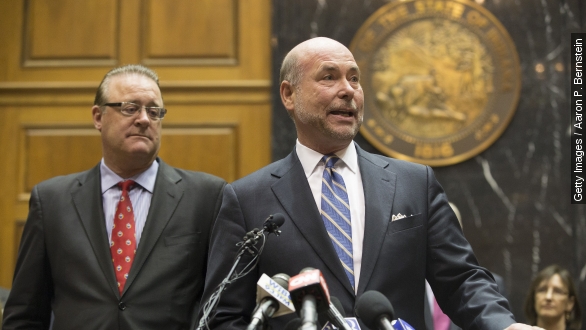 "The words sexual orientation and gender identity appear in Indiana's statute — or they will after this law is passed — in the context of nondiscrimination," former Indianapolis mayor and Eli Lilly executive Bart Peterson said. (Video via WRTV)

Surrounded by business leaders and Indiana lawmakers, the former mayor of Indianapolis announced what the state hopes will take it out of a spotlight those leaders clearly underestimated.

While supporters argued the bill was never about discrimination, celebrities denounced the law, artists canceled shows and businesses threatened to either leave the state or halt plans to expand. It led to Thursday morning's announcement of new language to "clarify" the law.

No matter the support, some citizens clearly interpreted RFRA exactly as opponents had predicted. One pizzeria that publicly cited RFRA as justification for not catering gay weddings closed amid severe backlash and even threats.

"If a gay couple was to come in, like say they wanted us to provide them pizzas for a wedding, we would have to say no," Memories Pizza co-owner Crystal O'Connor said.

"That's a lifestyle that you choose," her husband and co-owner, Kevin O'Connor, said. (Video via WRTV)

Another Muncie pastor who testified for the original bill and talked to NPR agreed. While religious organizations were already largely exempt from any of these provisions, the pastor compared himself to a baker who doesn't want to make a cake for a same-sex couple's wedding.

"The cakemaker is using his or her artistic ability to make a cake, and that cake communicates something," Pastor Tim Overton said. "That cake is speech. ... I just don't think they should be forced or compelled by government to use their speech to support someone else's perspective."

"In some ways, I'm glad we've had to go through this process," said Senate President Pro Tempore David Long.

Following the announcement that sexual orientation and gender identity would be protected under the new bill, state Senate and House leaders planned to hold a conference committee to negotiate the exact wording of the new language. (Video via WRTV)

But people on both sides of the debate have already said the "fix" isn't much of a fix.

The conservative group Advance America said the new language would "destroy" the bill it lobbied for.

And several outlets that now have their hands on the proposal itself have pointed out it doesn't place sexual orientation or gender identity in the state's list of groups protected from discrimination but simply keeps them from being discriminated against based on the "religious freedom" law.

The National Journal quoted one state representative still critical of RFRA who said Thursday: "Repeal this law. Secondly, put clear civil rights protections in place. Thirdly, rework the original, well-intended efforts for religious protection. It will send a message to the rest of the nation. And Indiana can begin to heal."

Indiana lawmakers have acknowledged the larger LGBT anti-discrimination debate is likely coming, though Republicans have not appeared receptive to passing such a bill in the past and both houses of the Indiana legislature are controlled by the GOP.