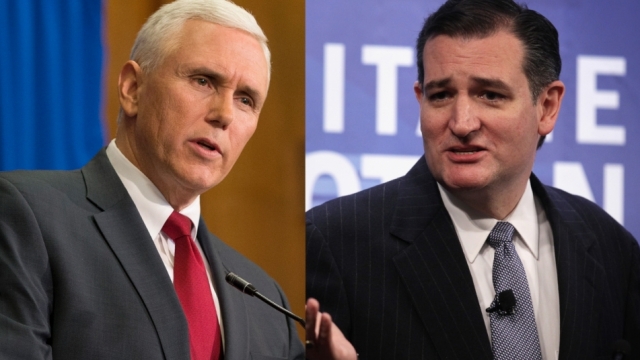 SMS
Indiana Gov. Mike Pence Endorses Ted Cruz Ahead Of State's Primary
By Briana Koeneman
By Briana Koeneman
April 29, 2016
Pence's announcement comes just days before the state's primary, which could be a crucial one for Cruz.
SHOW TRANSCRIPT

"This is a time for choosing, and all of America is looking to Indiana to make a choice. I'm not against anybody, but I will be voting for Ted Cruz in the upcoming Republican primary," Pence told WBIC.

Pence's announcement comes just days before the state's primary, which could be a crucial one for Cruz.

A win in Indiana is his best shot to prevent Donald Trump from snagging enough delegates to win the GOP nomination outright.

Pence's endorsement was clearly something Trump wanted, too. The GOP front-runner recently posted this photo to Twitter of himself and Chris Christie meeting with Pence.

Before the announcement Friday, Cruz told local media in Indiana he wasn't sure if he would get Pence's endorsement, but he praised him as a "strong leader" and "an extraordinary governor."