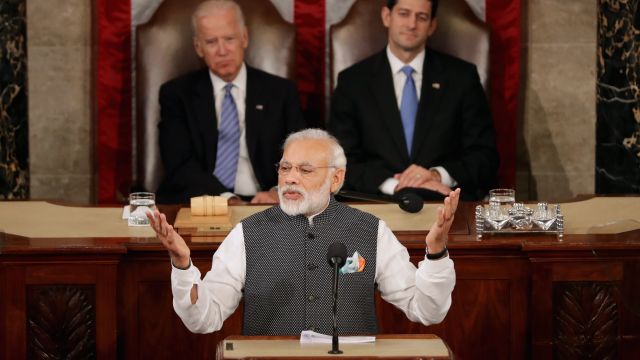 A few years ago, Narendra Modi wasn't even allowed in the U.S. But on Wednesday, the Indian prime minister spoke about cooperation in front of Congress.

Modi's falling out with the U.S. stems from his term as chief minister of a Hindu-dominated Indian state. Modi was blamed for failing to stop a series of mass killings of Muslims in 2002; he was denied a visa to enter the U.S. for nearly a decade.

But that swiftly became water under the bridge after Modi was elected India's prime minister in 2014. Modi used his address to call for closer relations between India and the U.S., emphasizing their shared democratic beliefs.

"In granting me this opportunity, you have honored the world's largest democracy and its 1.25 billion people," Modi said.

Modi pushed for improved trade ties as a way to bolster the economies of both nations.

"There can be no doubt that in advancing this relationship, both nations stand to gain as the U.S. businesses search for new areas of economic growth, markets for their goods, a pool of skilled resources and a global location to produce and manufacture. India could be their ideal partner," Modi said.

According to CNN, the numbers back the narrative. The outlet reports U.S.-India trade has increased by nearly $50 billion in six years.

Just a day before his address to Congress, Modi said his country will strive to join the Paris climate agreement by the end of the year and lower its rate of carbon pollution.

This video includes clips from the White House and The Times of India and images from Getty Images. Music provided courtesy of APM Music.