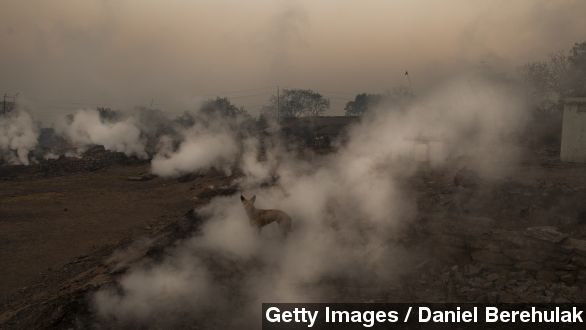 SMS
India's Pollution May Shorten Life, But Clean Fuel Limited
By Jill Ornitz
By Jill Ornitz
February 21, 2015
A study shows India's pollution is taking three years off the lifespans of half its population. But the nation's ability to use clean fuel is limited.
SHOW TRANSCRIPT

India's severe pollution problem could be shortening the lifespans of more than half of its total population by three years — that's according to a new report from researchers at the University of Chicago, Harvard and Yale.

According to the study, 660 million Indians live in areas of the country that exceed the country's acceptable levels for fine particulate pollution.

The report estimates getting pollution levels under control would add a total of 2.1 billion life years to the population.

Research conducted in the last year shows India's pollution has reached critical levels. According to the World Health Organization, 10 of the world's 20 most polluted cities in 2014 were located in India.

When President Obama visited India back in January, he warned the country was key in the fight against climate change.

"But here's the truth. Even if countries like the United States curb our emissions, if countries that are growing rapidly like India, with soaring energy needs, don't also embrace cleaner fuels, then we don't stand a chance against climate change," President Obama told an audience in New Delhi.

And while there were high hopes for Obama's meeting with Indian Prime Minister Narendra Modi, it failed to produce the kind of progress Obama's climate agreement did with China.

That agreement got both nations, who produce 45 percent of the planet's carbon emissions combined, to agree to curb greenhouse gas production.

Ultimately, India's energy problem can be traced back to what the developing nation has on hand to power its growth.

Renewable sources of energy are expensive, making them hard to come by in the country. (Video via NDTV)

In contrast, India has the world's fifth largest coal reserves. The nation's coal secretary told The Washington Post, "The question is, what do you have in hand? We have coal. There isn’t much choice available."

According to the study, the highest concentration of pollution in the country is around New Delhi. Pollution is less concentrated in the southern regions of the subcontinent.