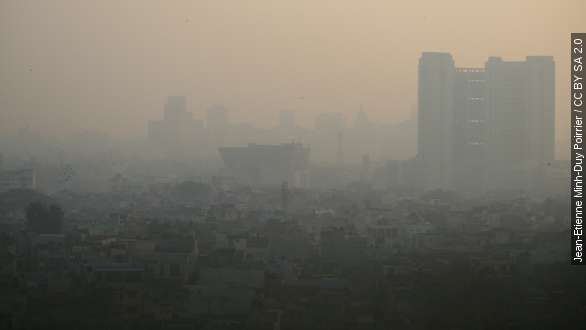 Last year, the World Health Organization ranked New Delhi as the most polluted city in the world.

Part of the problem may lie in the government's response, or lack thereof. (Video via DD National)

On Monday, Indian Prime Minister Narendra Modi announced the creation of a national air-quality index to monitor pollution in 10 cities.

Which sounds like progress. But in the announcement, Modi also denied India was one of the world's leading polluters and pointed to the country's low per-capita carbon emissions as proof. (Video via CBS)

That's despite the fact that The World Bank ranked India as the third biggest emitter of carbon dioxide in 2010, contributing more than 2 billion tons.

Denying India's a leading polluter is par for the course when it comes to Modi's government. Officials also rejected that WHO report saying Delhi was the most polluted city in the world. (Video via Press TV)

And critics have called government action to combat pollution so far as ineffectual.

For example, last year the government's National Green Tribunal banned cars 15 years or older from Delhi, something activists say missed the heart of the problem. (Video via NDTV)

"Average age of personal vehicles in Delhi is about 4 to 7 years ... So even if you get rid of them, I don't see that that's going to have a massive impact on air quality," Anumita Roychowdhury told Al Jazeera.

Cars are one of the leading contributors to air pollution in Delhi, and as the country prospers economically, the number of people driving them goes up. (Video via YouTube / soundspirit1's channel)

"Since I moved to Delhi, my breathing problem has gotten worse. I find it difficult to move around. The air is really filthy, and my asthma has aggravated and I feel worse," one man told the Financial Times.

But the problems posed by increasing development go beyond exhaust emissions: Construction work contributes to emissions and industrial development has led to deforestation.

Mongabay estimates India has lost some 10.7 million acres of forest over the past 20 years, and when you consider that one acre of forest can sequester thousands of pounds of carbon, that's a big loss. (Video via TERI)

Nevertheless, Indian broadcaster IBN reports there's no plan to take action, regardless of what the new air quality index says. Instead, in his address Monday, Modi asked Indians to forgo using electric devices once a week.

This video includes an image from Onewhohelps / CC BY 2.0 and music from Kevin MacLeod / CC BY 3.0.