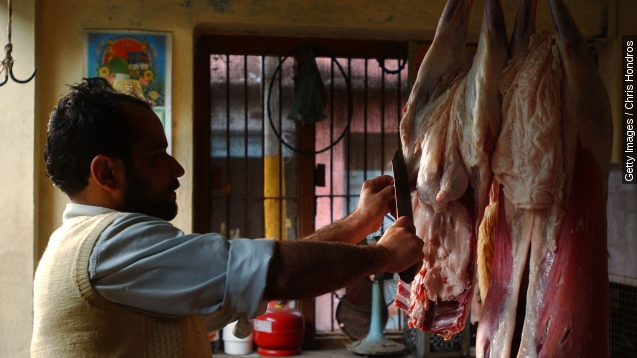 SMS
India's Beef Ban Apparently Includes Beef-Related Films
By Melissa Prax
By Melissa Prax
October 30, 2015
India's bans on killing cattle have been in place for some time, but stricter laws in the past months have prompted some opposition.
SHOW TRANSCRIPT

India has a beef with — well, beef. India is largely Hindu. Most of India's 29 states have bans on beef or restrict the slaughter of cows.

The conservative government has increased limitations in the past year since Prime Minister Narendra Modi's win.

Western state Maharashtra increased penalties in March. Selling or even possessing beef can now cost you up to five years in jail and a $150 fine. This is the first state to do a consumption ban on beef.

A food documentary entry in an Indian film festival was recently removed from the lineup by broadcast ministry officials. The festival is to take place Oct. 30-Nov. 1. The film, which included beef consumption, was shot last year in Maharashtra before the ban.

The broadcast ministry in India approves films in festivals and can prevent screening if "it would impinge on the security or integrity of the country or affect law and order."

Delhi, the capital, upholds a 1994 act that says it's illegal to slaughter or sell meat from cattle. (Video via Vimeo / Subhashish Aich)

On Tuesday, Delhi police checked on a canteen supposedly selling beef inside a building owned by the Kerala state government. It was a false alarm, but just another piece to a tense controversy in India, where people have even been killed for consuming beef. (Video via V6 News Telugu, News7 Tamil)

Kerala has been resisting a BJP-inspired beef ban in the state and wasn't happy with the police check. (Video via Francois Asia)

The ban caused a frenzy on social media with famous Bollywood actors joining in on the coversation.

While some conservatives praise the ban, it has brought up India's treatment of minorities such as Muslims and Christians who do consume meat.

India is the world's top exporter of beef, but keep in mind that cows aren't the only type of beef. The main export comes from water buffaloes, which can be legally slaughtered in India. (Video via YouTube / Julian Correa)