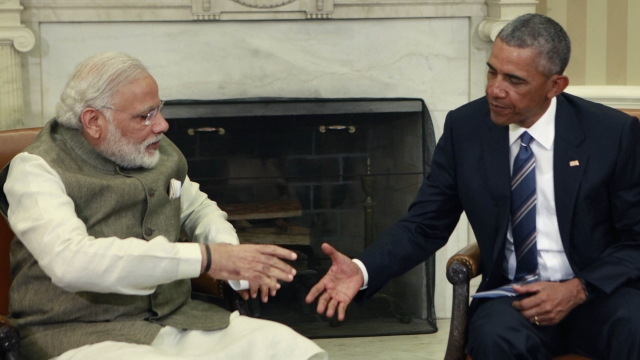 SMS
India Joining Paris Climate Agreement Could Stop It From Falling Apart
By Grant Suneson
By Grant Suneson
June 7, 2016
India's Prime Minister Narendra Modi says his nation will attempt to join the Paris climate agreement by the end of the year.
SHOW TRANSCRIPT

The Obama administration announced Tuesday that it added a major ally in the fight against climate change. India's Prime Minister Narendra Modi said his country will try to join the Paris climate agreement by the end of the year.

This is hugely important because the deal can only be ratified when at least 55 nations that represent 55 percent of the world's total emissions agree to it. The 195 nations that signed on in December only amounted to about half of total world emissions.

India is the third-largest emitter of carbon after China and the U.S., and its participation would push the deal past the 55 percent mark.

If India agrees to the terms during 2016, it would also prevent the next president from being able to legally back out of the Paris Agreement, which presumptive Republican nominee Donald Trump has promised to do.

The agreement aims to stop global temperatures from increasing by more than 2 degrees Celsius or 3.6 degrees Fahrenheit.

This video includes clips from the White House, CBS and Donald J. Trump for President Inc. and images from Getty Images.