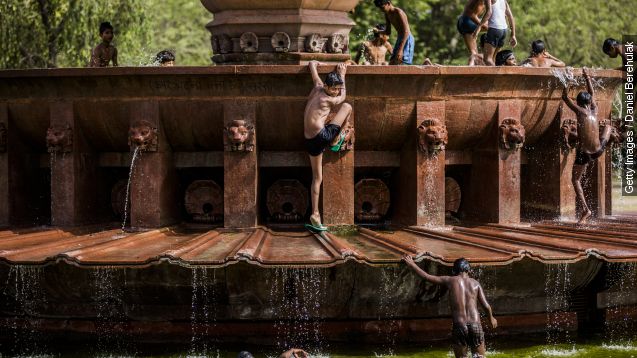 SMS
India Isn't Prepared For These Deadly Heat Waves
By Jake Godin
By Jake Godin
May 27, 2015
A heat wave in India has killed hundreds as temperatures have risen to 115 degrees Fahrenheit, putting many without shelter in danger.
SHOW TRANSCRIPT

The worst-affected state has been Andhra Pradesh in the south where more than 850 have died. (Video via News7 Tamil)

Multiple outlets report the neighboring state of Telangana has had the second-most deaths at more than 260.

Temperatures have soared the past week, with some cities seeing temperatures hit around 115 degrees Fahrenheit. (Video via Zee News)

Temperatures have reportedly been hot enough to melt asphalt, and taxi drivers have been warned to avoid driving during the hottest time of the day: between 11 a.m. and 4 p.m.

A study by the Natural Resources Defense Council found in 2013 that every construction worker surveyed in the Indian city of Ahmedabad was susceptible to heat stroke during afternoon shifts. (Video via YouTube / AhmedabadHD)

Also at risk are people in India's slums. Improper ventilation in poorly constructed shelters, a lack of accessible water and less opportunities for air conditioning all make those living in slums more susceptible to heat stroke. (Video via Department for International Development)

Climate change is also playing a part. According to The Indian Express, 2015 temperatures have been more than 9 degrees Fahrenheit above normal. Most of the deaths this year are reportedly the homeless or older day laborers who work outside. (Video via Journeyman Pictures)

India usually relies on its annual monsoon season to subdue the heat. While the rains are predicted to be on time this year, The Economic Times reports northern and central India will be stuck with high temperatures.

The heat wave is expected to break in other areas in the coming days. Until then, people are advised to drink plenty of water and stay indoors during the hottest part of the day.

This video includes images from Getty Images and McKay Savage / CC BY 2.0.