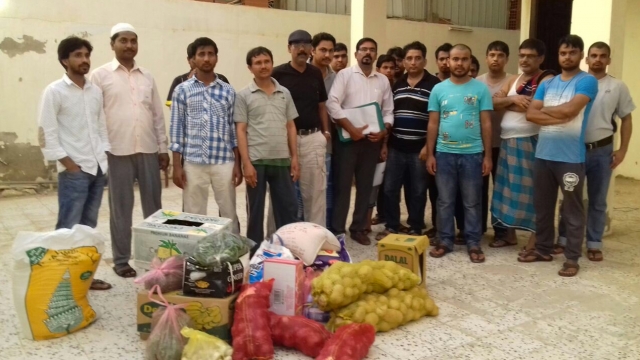 Saudi Arabia's government wants people to think the country is rich, but 10,000 laid off Indian migrant workers are saying otherwise.

India's foreign minister has vowed to make sure no Indian national in Saudi Arabia goes hungry. And the Indian Consulate in Jeddah has been delivering food.

India is also planning on flying some of these workers home.

The 800 Indians who lost their jobs most recently were laid off from a Saudi-Lebanese construction company.

The layoffs followed protests from workers saying the company had not paid its employees for seven months.

The largest group of expats in the kingdom are Indian. A 2014 agreement between Saudi Arabia and India prompted hundreds of thousands of Indians to flood to Saudi Arabia for work.

Of course, it's not only Indian expats that are struggling to make ends meet. Some estimates say a quarter of the population lives in poverty.

And the Saudi government has been tight-lipped on both situations.

This video includes clips from buytethebeef / CC BY 3.0, PBS and the Office of Indian Prime Minister Narendra Modi and images from the Consulate General of India, Jeddah.