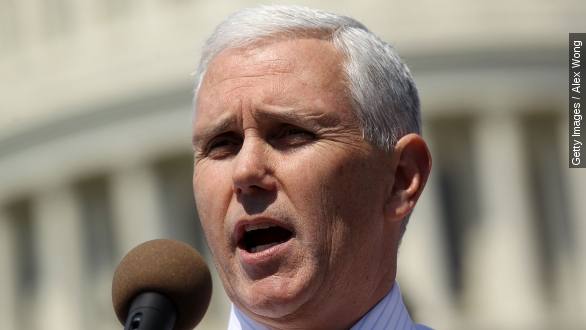 Indiana Gov. Mike Pence's interview on "This Week with George Stephanopoulos" was the latest in his effort to "clarify" the controversial bill he signed into law Thursday.

"This is not about discrimination; this is about empowering people to confront government overreach," Pence said.

"George, you're following the mantra of the last week online, and you're trying to make this issue about something else," Pence said.

Pence refused to answer Stephanopoulos' question about whether the law would enable discrimination, and instead accused the media of playing up the controversy over the bill.

Opponents of the bill, including some Indiana legislators, argue it would allow business owners opposed to same-sex marriage to use their religion as a defense when refusing to serve same-sex couples.

They point to the fact that high-profile supporters of the state's bill have said it will enable people to do just that, and that Indiana doesn't have any laws protecting against discrimination based on sexual orientation.

Pence told The Indianapolis Star, those kinds of laws aren't on his agenda.

Legal scholars are divided over whether the law would actually change anything, with some arguing it's more sweeping than legislation in other states, and others arguing it's not.