In Nice, Victims Get Memorials While The Killer Gets A Garbage Pile 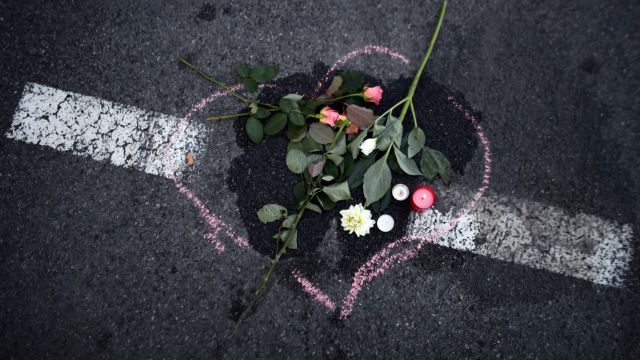 SMS
In Nice, Victims Get Memorials While The Killer Gets A Garbage Pile
By Jake Godin
By Jake Godin
July 18, 2016
As France observed a minute of silence in honor of the 84 people who died in the Nice attack, people threw trash on the spot where the attacker died.
SHOW TRANSCRIPT

This is where the driver who killed 84 people in Nice died. People have turned the spot into a garbage pile.

This is how France is honoring the victims. On Monday, a minute of silence was held throughout the country.

SEE MORE: At Least 3 Americans Are Among The Victims In The Nice Terror Attack

Almost 40,000 people showed up at a tribute service in Nice. Memorials have also started to appear where the attack took place.

Eighty-four people were killed when a man drove a cargo truck through a Bastille Day celebration. He was finally killed after driving more than a mile.

Some French people showed their frustration with the government by booing the prime minister in Nice. This attack is the third major terror attack in France since the Charlie Hebdo shootings in 2015.

France has extended its state of emergency by three months in response to the attack.