In Memory Of Ralph Baer, 'The Father Of Video Games' 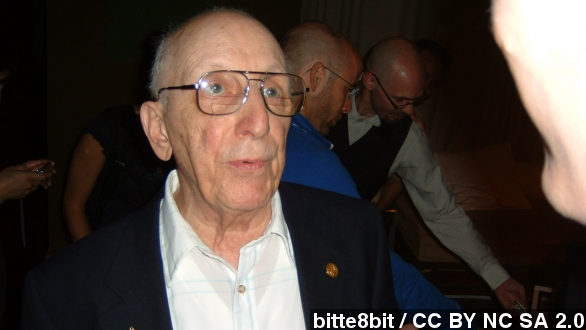 Ralph Baer, the man known as the father of video games, died Saturday at the age of 92.

In 1968, Baer invented the world's first home video game console at the time called the "Brown Box." It would later be marketed and sold as the Magnavox Odyssey. (Video via YouTube / FabTV)

He's also credited with the development of the light gun, a physical pointing device that allowed users to interact with their TV screen. (Video via YouTube / DarthMarino)

And his video game achievements didn't stop there. Baer was a co-inventor of Simon — the frustrating multi-colored memory game. In the end, Kotaku reports Baer held more than 150 patents. (Video via YouTube / TelevisionArchives)

As a writer for Mashable points out Baer's inventions landed him some recognition. He received the National Medal of Technology in 2006, and in 2010, he was inducted into the National Inventor's Hall of Fame.

Baer's accomplishments, however, weren't all rooted in video games.

According to a report from Kotaku, Baer fled Germany in 1938 and worked as a radio service technician in the U.S. He was later drafted by the U.S. army and “wrote training documents for Allied troops preparing for D-Day.” He eventually became an expert on small arms, and, upon returning to the U.S., opened several exhibits showing off his 18-ton collection of weaponry. (Video via YouTube / videogamesfoundation)

It was clear, though, his passions laid in video games. At the Game Developers Choice Awards in 2008, Baer received the Pioneer Award and had this to say:

“Had I listened to all those people back 40 years ago who were telling me to stop the nonsense ... and hadn't proceeded, we might not all be here today. ... It's a privilege to be here. Thank you very much, I appreciate the honor, and I'm still cranking out stuff,” Ralph Baer said during the Game Developers Choice Awards.