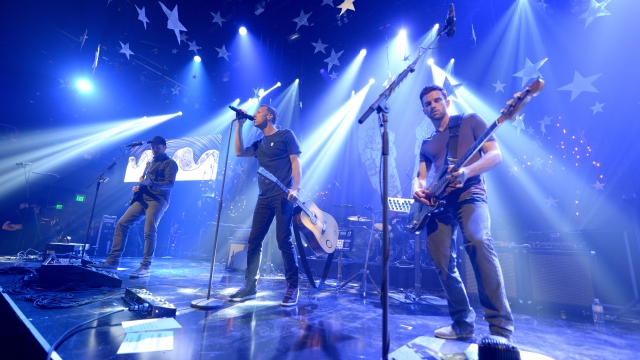 SMS
In Defense Of Coldplay's Super Bowl Billing
By Ryan Biek
By Ryan Biek
February 5, 2016
If you dig a little deeper into Super Bowl performances over the past 10 years, Coldplay might not seem like an odd headliner.
SHOW TRANSCRIPT

Coldplay has rocked stadium-filled crowds plenty of times, but was anyone else a little surprised when they heard the British band will be headlining the Super Bowl halftime show? (Video via Coldplay)

"When you try your best, but you don't succeed," sings Chris Martin in "Fix You." (Video via Parlophone Records / Coldplay)

Hopefully the football game is tied.

When Coldplay was announced as the performer, many considered the band better suited for a chess match.

The headliners will share part of their show with Beyoncé, whose music is much more likely to be heard at a club or party –– which is kind of what the Super Bowl is. (Video via Beyoncé)

But if you dig deeper into the past 10 years of Super Bowl halftime performances, you'll find Coldplay could be a pretty good fit — dare we say it, maybe even more prototypical than Beyoncé? (Video via NFL)

Members of the Beyhive, give me a chance to explain. We took a look at the speed of past Super Bowl sets, thinking beats per minute could be a good indicator of how lively an artist's performance is.

We only counted the headliners' songs for the past 10 Super Bowls. For example, Missy Elliot's songs during last year's Super Bowl didn't affect Katy Perry's average, even if Perry sang in the background. (Video via Capitol Records / Katy Perry)

After averaging all the songs in their sets to get an overall pace for each artist, we found Beyoncé's set average in 2013 was actually the slowest.

Obviously we don't know which songs Coldplay will choose to include in its set, and there's definitely room for debate. We chose their top songs as charted by iTunes, focusing on the most popular six, a good middle-ground estimate for recent headliners' sets. (Video via Apple)

Now, what gets interesting for Coldplay is it all depends on their most recent album "A Head Full of Dreams." (Video via Parlophone Records / Coldplay)

If they perform "Adventure of a Lifetime" and "Hymn for the Weekend" (which features Beyoncé), their set will be the second slowest, just above Queen Bey's.

But if they skip over their newest work and feature more throwbacks, like Katy Perry did with "I Kissed a Girl" and the Black Eyed Peas with "Where Is the Love?," their set actually becomes the third fastest, behind Prince and the Rolling Stones.

With that kind of range, Coldplay could fall right in the middle as a prototypical Super Bowl performer. Of course, there's more to a great performance than just high BPMs.

Coldplay takes center stage with Beyoncé, and likely some other top artists, Feb. 7. (Video via NFL)