In 45 Years, We've Lost Nearly Half The Ocean's Animals 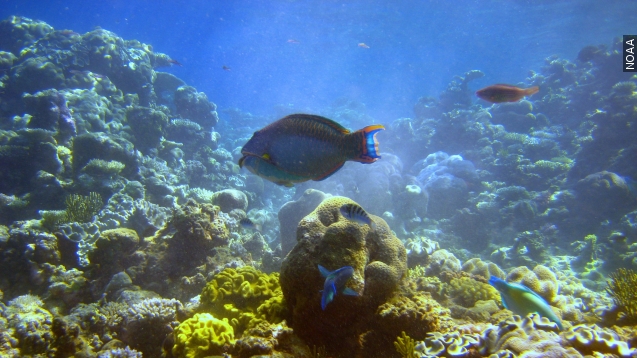 SMS
In 45 Years, We've Lost Nearly Half The Ocean's Animals
By Evan Thomas
By Evan Thomas
September 17, 2015
A new report from the World Wildlife Fund shows overexploitation and climate change pose a greater risk to the world's oceans than ever before.
SHOW TRANSCRIPT

The World Wide Fund for Nature — also known as the World Wildlife Fund — says half of the world's marine animals have died out in a little more than a generation.

Since 1970, marine animal populations have declined by almost 50 percent. Some commercial fish families, including tuna and mackerel, have lost 75 percent of their stock. (Video via World Wildlife Fund, National Geographic)

"Often that word 'emergency' gets bandied about, but in this situation it really is an emergency," said one WWF official in Australia.

Over-exploitation is the greatest threat to ocean species, but the warming climate is also driving the fastest changes in the oceans in millions of years. Temperatures are higher than ever before, and acidification is a significant problem. (Video via NASA)

One WWF official told The Guardian: "We were taught in the 1980s that the solution to pollution is dilution, but that suggests the oceans have an infinite capacity to absorb our pollution. That is not true, and we have reached the capacity now.” (Video via NOAA)

The study finds the combined factors can do trillions of dollars of damage to worldwide economies every year. Economies that depend on fishing and local marine habitats are especially at risk.

The good news is it's not too late to reverse the damage and prevent further devastation. Later this month, nations will meet to discuss the 2030 Agenda for Sustainable Development. WWF says it's essential that governments use that meeting to address ocean policy while there's still time. (Video via NOAA, The European Economic and Social Committee)