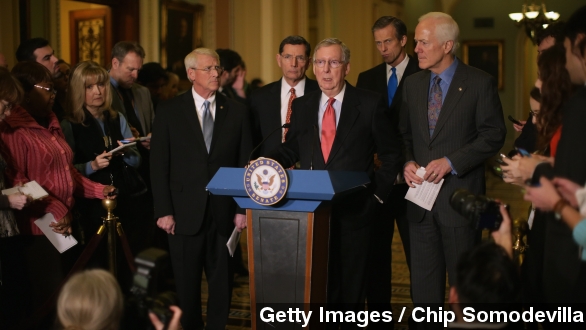 Wednesday the Senate failed to take up a bill that would reject the president's executive orders on immigration — again. (Video via C-SPAN)

The bill would have funded the Department of Homeland Security, which oversees immigration policy. It also would have limited President Obama's executive action deferring deportation for undocumented immigrants who came over as children. (Video via The White House)

It was the second day in a row the Senate failed to take up the bill, with Democrats united in voting against debating it, along with both of the Senate's Independents and Nevada Republican Dean Heller.

But the divisions aren't strictly down partisan lines. Although Republicans have vowed to overturn the president's executive action, they seem increasingly divided on how exactly to do that.

Specifically, as Politico points out, Senate Republicans are having trouble convincing their counterparts in the House that they don't have the votes to bring the bill to the floor and House Republicans need a Plan B.

House Republicans have taken a much more hard-line approach and "say the Senate must include some language to chip away at Obama's immigration policies for a bill to clear the House — but Senate leaders are in a quandary because they can't change the bill if Democrats block the floor debate from even occurring."

Crucially, the resolution of all of these divisions is on a deadline — the Department of Homeland Security is set to run out of funding by Feb. 27, at which point it would shut down.

The shutdown of such an important and visible body could hurt the newly sworn-in Republican majority in the Senate and Republicans in general, although it could also reflect badly on Senate Democrats for blocking the bill's debate. (Video via Office of Sen. Tom Cotton)

For his part, Homeland Security Secretary Jeh Johnson — whom President Obama nominated for the post — has unsurprisingly backed the passage of a clean funding bill. (Video via U.S. Department of Homeland Security)