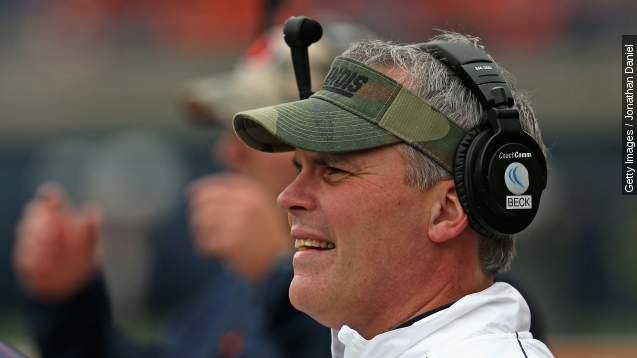 Illinois coach Tim Beckman was sent packing Friday following a preliminary investigation into his treatment of student-athletes. According to a statement posted on the Fighting Illini website, Beckman is accused of pressuring players to play through injuries and threatening to snatch scholarships of seniors after the football season ended.

Getting rid of a head coach right before the first real kickoff of the year is a little surprising. But some say the clues have been there all along. To them, Beckman's exit was just a matter of time, and allegations against him could put a greater focus on how colleges handle injured student-athletes.

"Once you're done with college, college is typically done with you. You're not only stuck with the injuries you sustained, you're also stuck with the medical bills," HBO's Bernard Goldberg reported.

Former Illinois lineman Simon Cvijanovic went on a Twitter rant in May saying he has to have therapy for the rest of his life because he wasn't given the option of having his knee repaired after an injury.

CNN's Sara Ganim reported in July other Illinois players had similar complaints, alleging they were forced to play injured and were harassed by Beckman.

The final report on Beckman hasn't been released, but the law firm reviewing the allegations has interviewed 90 people and obtained 200,000 documents related to the allegations. After Cvijanovic's dismissal, he tweeted that he intends to call a meeting with Illinois, the Big Ten and the NCAA to address the lack of protection for student-athletes.